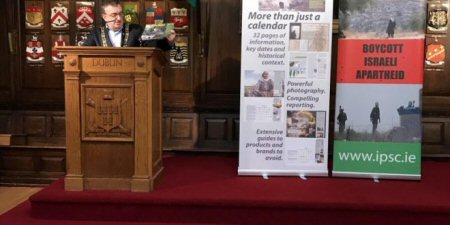 The theme of this year’s calendar is ‘Life in Palestine’, and every month explores a different aspect of the lives of ordinary Palestinians, and the difficulties and injustices they face living under Israeli’s apartheid system and military occupation.

We begin in January, with the Israeli occupation and depopulation of the Latrun area, and end in December with a message from Palestinian Christians asking for justice. There are plentiful notes for taking action, boycotting Israeli products, and supporting the Boycott, Divestment and Sanctions (BDS) movement accompanying every month.

The calendar was designed by activist Mike Rahr and was produced by the Cork branch of the IPSC.

Speaking about the calendar, Lord Mayor of Dublin Mícheál Mac Donncha said: “As we close this 50th year of Israel’s occupation of the West Bank and Gaza, it is my honour as Lord Mayor to launch the latest ‘Life In Palestine’ calendar produced by the Ireland-Palestine Solidarity Campaign.

The calendar provides a valuable insight into the daily and historical injustices faced by the Palestinian people as they struggle for the freedom, justice, equality and peace that has been so long denied them.

The Calendar also has lots of useful information about companies and institutions that profit from Israel’s military occupation and war crimes, and, importantly, how to avoid spending money that will help them profit further.”

IPSC Chairperson Ms. Fatin Al Tamimi said: “We produce this calendar every year because we wish to convey to the Irish public that every day Palestine in the hearts of my people, whether they live in our homeland, in the disapora or are one of the millions of Palestinians in exile.

We hope that people will use it both as an awareness raising and informational tool, and as a guide to taking action to help the Palestinian people end Israel’s system of apartheid, military occupation and forced exile.”

Alongside members and supporters of the IPSC, also attending the event were representatives from Academics for Palestine, PalFest Ireland, and we were honoured to be joined by Badee Dwaik of Hebron Human Rights Defenders.