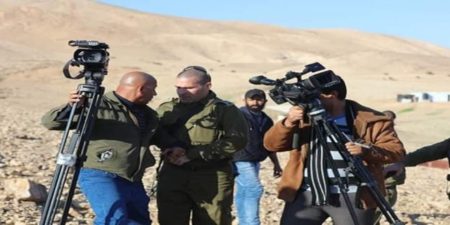 The first month of 2020 witnessed a total of 27 violations against media freedoms in Palestine, 23 of which were committed by the occupation forces and authorities, while various Palestinian authorities in the West Bank and Gaza Strip committed only 4 violations, MADA said in a report, according to the PNN.

Among the most tragic incidents witnessed by the past month, was when the doctors at Jordan Hospital in the capital, Amman, informed the journalist Attia Mohammad Darwish (32 years old, from Gaza) that he completely lost his sight in the eye that was injured more than a year ago (on 14th Dec. 2018) by a gas bomb, which was fired at him by the Israeli soldiers, and there was no hope of rescue or consistent treatment.

Darwish was informed that he completely lost sight in his eye about three months after the journalist, Moath Amarneh, lost sight in his left eye in similar circumstances, as he was shot by an Israeli soldier while he was covering a peaceful protest against the settlement in Souref, West Bank.

The number of Israeli violations increased from 15 violations in December 2019 to 23 in January 2020. The most prominent of which is the abuse of photojournalist Thaer Abdel Nasser Al-Sharif over several hours after he was detained by the Israeli occupation soldiers at an army point near Arroub camp in the West Bank, and summoning the cameraman Abdel Mohsen Shalaldeh by the Israeli occupation Intelligence and threatening him with death if he continues to film around Ibrahimi Mosque in Hebron.

The Israeli violations documented last month (January 2020) have affected Reuters Cameraman Adel Abu Neima (detained and prevented from coverage), WAFA Agency Staff consisting of the cameraman Sulaiman Mahmoud Abu Srour, and reporter Nadeem Ahmad Alawi (prevented from coverage), Mohammad Jareer Hamdan (sprayed with pepper), Yazan Jafar Abu Salah (arrested), cameraman Iyad Hassan Abu Shalabk (assaulted and prevented from coverage), Shows presenter at Palestine TV journalist Thaer Abdel Nasser Al-Shareef who was arrested and detained for four hours and a half by the occupation soldiers at one of the military army points near Arroub Camp, not to mention he was assaulted and abused several times, the cameraman Rabee Hassan Muneer (suffocated and passed out), the cameraman Abdelmuhsen Tayseer Shalaldeh (summoned and threatened with death if continued to film near the Cave of the Patriarchs), in addition to detaining the journalists: Fathi Khaleel Barahma, Omar Ahmad Hassan Abu Awad, Adel Abu Nema, Sulaiman Mahmoud Sulaiman Abu Srour, by the Israeli occupation forces and preventing journalists from covering two protesting events organized in Jericho and the Valleys, assaulting Palestine TV staff (including the cameraman Fadi Taleb Khilaf, the cameraman Thaer Yousef Arjan, and reporter Azmi Waleed Banat) by firing a gas bomb at them and prevent them from covering events in Arroub Camp.

Furthermore, the doctors at Jordan Hospital in the capital Amman informed the photojournalist Attia Mohammad Darwish, who was injured more than a year ago by a gas bomb in the face (fired directly by one of the Israeli soldiers) in the eye, that he has lost sight completely in the eye.

The Palestinian violations included assaulting the journalists Mohammad Awad and Mohammad Al-Masri by members of the Palestinian Authority’s National Security (who are stationed at what is known as “Point 5/5” in Beit Hanoun/Erez checkpoint, Gaza Strip), preventing Palestine TV staff consisting of the reporter Mohammad Salim Abu Hatab, and the cameraman Hossam Attiya Al-Masri, to prepare a report on the damage caused by the weather conditions in Khan Yunis and deleting a filmed material they had completed earlier.