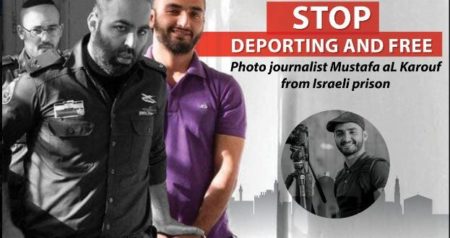 The Palestinian Center for Development and Media Freedoms (MADA) has called on international legal and human rights organizations to put pressure on the Israeli occupation government to stop its attempts to deport the Palestinian photographer, Mustafa Al-Karouf, outside of the Palestinian territories and release him, as he has been detained for more than six months, now, not to mention giving him the right to reside him his wife, two children and family staying with them, in Jerusalem, since he was a child.

Eddy Lustigman, the lawyer for Al-Karouf, said to MADA that Israeli authorities tried, at about 9:00PM on Sunday (22 July 2019), to deport the photographer, but that Jordanian authorities refused his entry into their territories, as he does not have any documents enabling him to enter Jordan, specifically the visa. After spending many hours (approximately 19 hours) on the Jordanian borders, Israeli authorities returned him to where he was being detained, at Ramle Prison.

Lustigman stated that, in the coming days, she will request his release through Hamoked Organization, PNN further reports.

Israeli occupation authorities, for “security reasons,” refused to grant Al-Karouf a residency in Jerusalem, even though he lives and resides there since childhood, with his family, wife and children. Al-Karouf does not hold any other nationality and has never been arrested or convicted of any offence or felony.

On 21st January, 2019, Al-Karouf filed an appeal to the Israeli court against the decision of the Israeli Ministry of Interior to refuse his requests pertaining to residence.

On the following day, 22nd January, 2019, he was arrested by Israeli police and transferred to Jafun Prison, in Ramle, a prison dedicated for deporting “illegal” foreigners even though Al-Karouf was born in Algeria on 21st Septemeber, 1987. In 1999, he moved to Jerusalem with his family.

He is married to Jerusalem citizen Tmam Nofal Al-Karouf, and they have one child. All of his family members, including his wife and daughter, hold the blue (Jerusalemite) identity card, while Mustafa does not hold any other nationality or residence other than where he lives, including the West Bank. Israeli authorities continue to treat him as an illegal resident and strive to deport him from Jerusalem, as they also attempted to do so last Sunday and Monday.