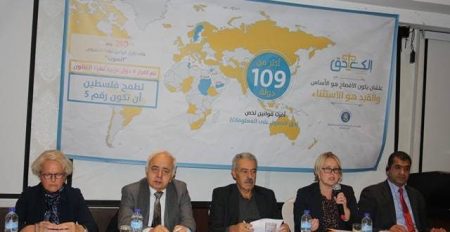 The Palestinian Center for Development and Media Freedoms (MADA), in collaboration with the Consulate General of Sweden in Jerusalem, and Representative Office of Finland in Ramallah, organized an event commemorating 250 years of the enactment of the first press law which granted access to information in the Kingdom of Sweden.

The commemoration included, according to the PNN, the participation of several spokespersons (Ann-Sofie Nilsson Consul General of Sweden in Jerusalem, Pirkko-Liisa Kvostila Head of Representative office of Finland, Dr. Ghazi Hanania chairman of board for MADA, Mousa Rimawi General director of MADA, Hala Tannous UNESCO office in Ramallah, Rasha Amarneh Anti-corruption commission Mohammad Munjed on behalf of the Ministry of Justice, and Salah Maharqah MDC and representing “Khabirni Coalition”), in addition to journalists and representatives from different civil society groups and international representative offices and organizations.

Rimawi highlighted some of MADA’s achievements, during the past 10 years, as the most prominent ones, with regard to MADA’s leading role in defending freedom of expression and media in Palestine, in addition to granting MADA a special consultative status at the ECOSOC, and electing MADA as a member in the steering committee of GFMD.

Dr. Ghazi Hanania illustrated the importance of MADA’s efforts and activities to ensure a healthy legal environment in contribution. He also noted, “based on [what] we started since around four years, [the] enormous and systematic efforts to ensure achieving our goal, the enactment of [an] access to information law in Palestine”, which became attainable today, thanks to several civil society partners, and particularly the Khabirni coalition, in collaboration with other governmental institutions.

The General Consul of Sweden in Jerusalem, Ann-Sofie Nilsson, highlighted that the Swedish law is based on four major principles which formed the basis of freedom of opinion and expression in Sweden, including inter-alia: the cancellation of governmental control, providing access to public documents which are no longer considered secret, and the transition from prohibition and prevention to printing and publishing, the consecration of freedom of press, and ensuring this protection in the Swedish Constitution.

She also clarified that the criticism of the ruling class, before the enactment of this law, was not acceptable, noting the importance of this law in the fight against corruption, and enabling citizen access to documents and the monitoring of events, thus maintaining control over the government’s performance  and contributing to the fight against corruption, to finally culminate in strengthening Sweden’s public confidence in its democratic institutions.

She also added that freedom of opinion and expression is still under threat and violation several countries across the globe, and that she hopes to guarantee such access to information and freedoms on the international level. She praised all efforts that Palestine is exerting in defending media freedoms, and expressed pride in her own country for supporting these efforts.

Pirkko-Liisa Kvostila, head of the Representative Office of Finland in Ramallah, assured that freedom of expression can’t be achieved spontaneously, noting that the adoption of the law in Finland (which was part of the Kingdom of Sweden by that time) canceled state censorship and opened the door for access to governmental documents.

Kvostila illustrated the track of evolution in defending freedom of expression in her country, which was ranked first for years, internationally, and noted that they are glad to see Palestinians working toward the enactment of a law to access information and freedom of opinion, and that Finland supports those efforts.
Muhammad Munjed, on behalf of the Ministry of Justice, clarified that they are in process of reforming and enacting several laws, with note to the money laundering law, to ensure transparency and integrity in such endeavors, adding that the law of access to information serves the goals of sustainable development.

Rasha Amarneh, on behalf of the anti-corruption commission, clarified that this law contributes to the fighting of corruption on two main levels: firstly, the role of the law as a preventive measure, in detecting corruption and addressing all violations that might occur, and noting that the prevention of corruption is based on the principle of transparency, which is one of the most important steps in achieving the objective of integrity.

She also added that “integrity is achieved through law enforcement (access to information law) as it enables the citizens to control over decisions and public policies, as integrity and transparency can never be realized under secrecy.”

Furthermore, Hala Tannous, on behalf of the UNESCO office in Ramallah, emphasized that freedom of expression and opinion is based on two significant levels — access to and distribution of information — clarifying that adopting a law in this regard has always been one of the major UNESCO recommendations.
She also praised the collaborative role in drafting a Palestinian access to information law, illustrating that all efforts will be realized soon, in a modern law well harmonized with international standards.

She also added that this right is now adopted as part of the sustainable development plan on the international level, as many states adopted the right to access information through their legislation. “Yet, it’s never guaranteed without enacting a specialized law in this matter.”

Saleh Masharqa, on behalf of MDC, and also representing the Khabirni coalition, assured that several states adopted laws in this regard, yet they remain ‘ink on paper’ if they aren’t implemented truly, as those in MDC worked on different angles to well ensure the implementation of the law. “Hence, the  first recommendation of our study [was] to several CSOs, to hold training for their staff in this regard, and to ensure the inclusion of this law in courses at Birzeit University, to ensure that our students are informed and educated in accordance to access to information right, and the practice and enjoyment of the right”.

Masharqa reiterated the attempts of the Khabirni coalition to endure all efforts needed to ensure the continued enactment of such access to information laws, fed with research and debate.