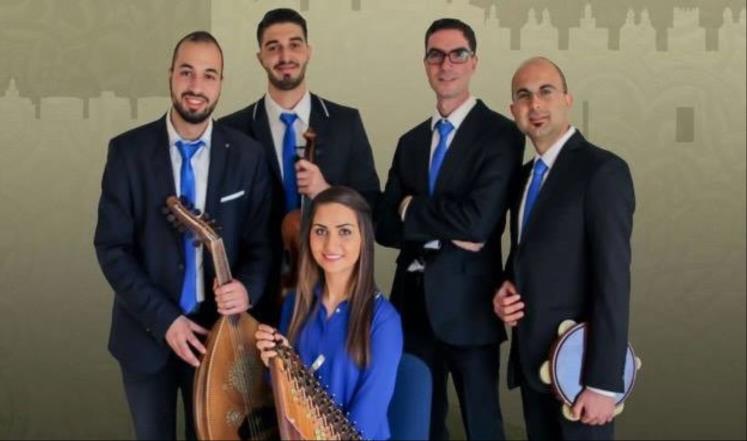 Mazaj Ensemble kicked off its third year with youthful energy, enthusiasm, and with a completely different musical vision which infuses both Oriental and Western classical music.

Mazaj Ensemble adapts melodies and arrangements to merge both Oriental and Western classical music in one distinct scope that reflects a new artistic reality, one which is a vibrant extension of successive civilizations that left a cultural and musical impact on the land of Palestine over centuries.

“When the language of speech becomes deactivated, music becomes the food for the renewable soul, looking for truth, life and peace. And, when night becomes calm, dreams and hopes hide behind the cloak of its calmness. This is exactly what we aspire to achieve.”

The Ensemble members adopted this motto following the launch of their band, pointing out that music has directly related to human moods and emotions.

“Our band derives its distinctive instrumentals from the heart of the Palestinian suffering. It humanizes the agony of the everyday Palestinian pain, which must light a beacon of hope through creative melodies derived from the great history of Jerusalem and its ancient walls,” percussionist Sabbah says.

In spite of Majaz  Ensemble’s young age, harmonization among its members has taken the band into a quantum leap upward, and it has been the key to Ensemble’s success.

“We [were] friends [from a] long time ago, and we daily meet together at Edward Said National Conservatory of Music, in Jerusalem. All of us received our music education there, and we are music masters there, as well,” Sabbah said.

“Being at the conservatory, the percussionist added, helped us to continuously discuss the performance of the Ensemble.”

Majaz Ensemble introduced its first artistic piece of music entitled, “Rhapsody of Gaza”, which describes the story of wars on the blockaded Gaza Strip and the tragic situation of the region, at many local festivals.

The band is currently in the process of producing a new artistic piece of music called “A Travel”, which imitates details of everyday Palestinian life, and raises the dream of freedom for every Palestinian living under Israeli occupation.

Ages of the band members range from 21 to 35 years old. Maral is considered the youngest player of Mazaj Ensemble.

“The ensemble was founded during the time that I dropped out [of] qanoun playing for a long time because of my study at high school,” she said.

Maral added, “I felt deep gratitude upon joining Mazaj Ensemble because I’m working with music masters who refreshed my own skills and at the same time helped in developing new ones.”

Five years ago, Maral joined Birzeit University to master pharmaceutical medicine. In addition, she is a teacher of qanoun at Edward Said National Conservatory of Music.

Oud player Osama Abu Arafa began playing oud when he was 12 years old. He joined the teaching staff of Edward Said National Conservatory of Music after his graduation from Business Administration of Bethlehem University.

Abu Arafa has deep inclinations for music, pointing out his love for the Arab classical style.

But, when he lived in Switzerland for several consecutive months, he picked up different musical styles from around the world, which helped him cross over between different civilizations through playing musical instruments.

Mazaj Ensemble is scheduled, next April, to take part at its world premiere in a massive festival in Finland.