Many Injured As Israeli Soldiers Attack Weekly Protest in Ni’lin 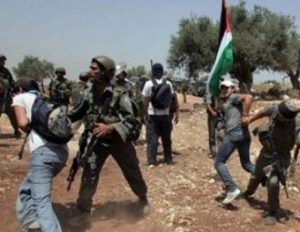 Israeli soldiers assaulted Friday, dozens of protesters holding the weekly protest against the Annexation Wall and colonies, in Ni’lin village, near Ramallah, wounding many persons, including a child and an elderly man.

Medical sources said the soldiers surrounded the village, fired dozens of gas bombs and concussion grenades at the protesters, and many surrounding homes, causing many to suffer the effects of tear gas inhalation.

They added that among the wounded were an elderly man, identified as Mustafa Rasheed ‘Amira, 85, and a child identified as Mohammad Saleh ’Amira, 10. Spokesperson of the Popular Committee against the Wall in Ni’lin Mohammad ‘Amira urged the Palestinians to plow and plant their lands, as a form of resistance, especially since the military repeatedly uproots and burns farmlands, mainly olive orchards.