For The First Time In 11 Years, Army Refrains From Using Weapons In Bil’in 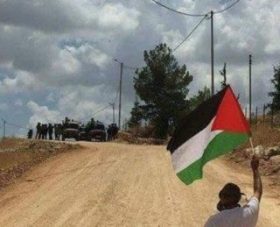 Dozens of Palestinians, Israeli and international peace activists held, on Friday, the weekly nonviolent protest against the Annexation Wall and colonies, and for the first time in eleven years, Israeli soldiers refrained from using their weapons.

As the case every week, the protest was organized by the Popular Committee against the Wall and Colonies in Bil’in, in participating of dozens of Palestinian, Israeli and international peace activists, starting from the center of the village, heading towards the villagers’ orchards.

The protesters carried Palestinian flags, and marched in the streets chanting and singing for national unity, steadfastness, ongoing popular resistance, liberation, the release of all detainees and boycotting Israel.

|Many Injured As Israeli Soldiers Attack Weekly Protest in Ni’lin|

Coordinator of the Popular Committee in Bil’in, Abdullah Abu Rahma, said this is the first time in eleven years of ongoing weekly nonviolent protests, that the Israeli soldiers refrain from firing on the protesters, and instead just photographed and filmed them.

He added that the soldiers also tried to get the protesters come to a close proximity with them, but years of experience with the army and its tactics have proven that when such a thing happens, the soldiers easily kidnapped and detained the protesters.