Many Palestinians Injured By Army Fire Near Ramallah 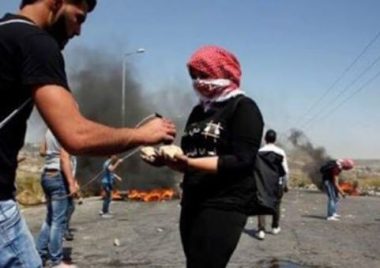 Israeli soldiers attacked, Thursday, Palestinians marching in solidarity with the hunger striking detainees, near Ramallah city, in central West Bank, and fired rubber-coated  bullets at the protesters, wounding at least four, in addition to causing dozens of protesters to suffer the severe effects of teargas inhalation.

The soldiers fired many rubber-coated steel bullets, gas bombs and concussion grenades, at the protesters as they marched in solidarity with the Palestinian detainees who continue their hunger strike for the 25th consecutive day.

The attack led to clashed between the soldiers, and dozens of youngsters, who hurled stones at the invading forces.

Medics moved four Palestinians, who were shot with rubber-coated steel bullets, to local hospitals in Ramallah, and provided the needed treatment to scores of residents who suffered the severe effects of teargas inhalation.

Meanwhile, the head of the Palestinian Prisoners’ Society (PPS), Qaddoura Fares, stated in a press conference held at a protest tent in Ramallah, that the detainees are entering a very serious stage of the hunger strike, especially since many became unable to walk or stand.

On its part, the International Red Cross announced that its representatives managed, for the first time, to visit with the detained leader, legislator Marwan Barghouthi, but did not reveal any further details, citing medical ethics and confidentiality.