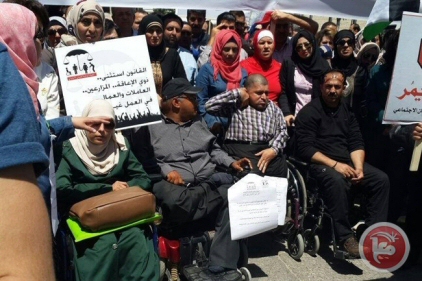 Thousands of Palestinians, on Tuesday, demonstrated outside of a government building, in the occupied West Bank hub of Ramallah, against the Palestinian Authority’s approval of a new law many believe fails to provide adequate protection for workers.

Social Security Act No. 6 was ratified by PA Cabinet members in February and approved by defacto Palestinian President Mahmoud Abbas the following month.

The law has since brought a downpour of criticism from critics who say it disadvantages those with disabilities, retirees, and private sector workers.

The organizers of Tuesday’s rally demanded that the new law be suspended until discussions were held on a national level, in order to address concerns that the law acts as a detriment to employee savings without guaranteeing security from the state.

Organizers said that, under the new social security system, “expected retirement income won’t be enough to enable retired employees and workers to live in dignity.”

While the PA was expected to begin implementation at the beginning of this month, a number of political parties in parliament, civic organizations, and trade unions reportedly opposed the law.

Palestinian union officials, in approving the draft law under pressure from employers, called upon them to rescind their endorsements, Ma’an News Agency additionally reported..

A leader of Palestinian Progressive Labor Union Front (PLUF), Mohammad Jawabra, earlier this month said the law “failed to prioritize the interests and needs of workers,” creating “a social security system that ensures workers with disabilities and retirees will live in poverty.”

PLUF also criticized union officials for allegedly approving the draft law under pressure from employers, and called upon them to rescind their endorsements.

Tuesday’s rally marked the most recent amid an apparent increase in public demonstration against the PA in recent months.

A large group demonstrated in Ramallah earlier this week demanding the PA release three Palestinians detained on suspicions of planning an attack against Israel.

Weeks earlier, a teachers’ strike brought the largest public demonstrations against the PA in years.