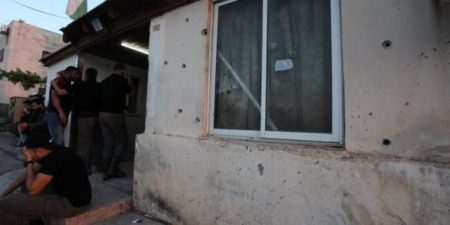 Palestinian Government Spokesman, Ibrahim Melhem said that the attack on the Palestinian Preventive Security headquarters, in the city of Nablus, represents a dangerous escalation aimed at undermining the most important pillars of the establishment of a Palestinian state, and endangering internal security.

PNN reports that Melhem, in a statement on Tuesday, said the seriousness of this attack is doubled as it comes after the invitation the US Ambassador to Israel, David Friedman, said that Israel should “at least” annex parts of the West Bank to it.

“The government strongly condemns this attack and commends the courage of security members of the Preventive Security Forces in their response to the attack,” Melhem added.

For its part, the Ministry of Foreign Affairs and Expatriates said that the provocative assault was an extension of the open war launched by the Israeli occupation authorities, against the Palestinian people, cities, villages, towns and camps with the aim of perpetuating the occupation and settlements. It also considered the attack as a was a way create a state of chaos in order to pass the so-called “Deal of the Century.”

On Tuesday, early morning, a group of Israeli soldiers surrounded the building and blockaded it while opening fire from three sides before they withdrew from the area. In the overnight attack, one Palestinian security guard was wounded in the hand.

“This is not the first time and will not be the last that the occupation army harms our people, but the dangerous part in this incident is that a Palestinian military headquarters was targeted,”  Governor of Nablus Ibrahim Ramadan said.

The Israeli military, on the other hand, claimed that the overnight attack was a case of apparent mistaken identity, and Israeli media has reported on the incident as being a “firefight” despite Palestinian sources saying there was no retaliatory fire exchanged.