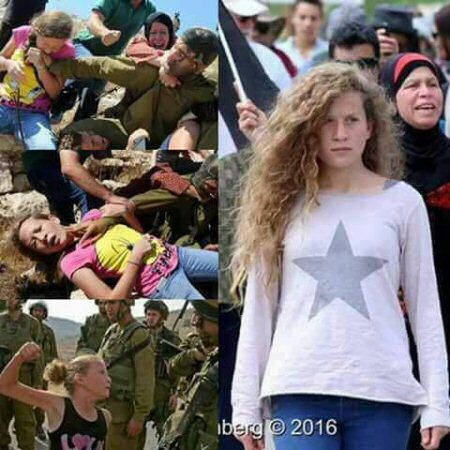 No break for the kid-targeted repressive operation of the Israeli forces. Tonight, soldiers raided Nabi Saleh and arrested Ahed Tamimi. Since years, the village has been the scene for many protests against Halamish illegal settlement, of which the construction led to land confiscation and theft of water from the local spring belonging to the Palestinians. During these years, this little village echoed the Palestinian struggle all over the world.

16-year old Ahed has often appeared in videos where she is seen facing Israeli military during protests. On the 18th of December, when soldiers shot 14-year old Mohammed Tamimi, in the face with a rubber-coated steel bullet (still being treated in a medically-induced coma in the hospital), she stood in front of the entrance pushing the Israeli soldiers back trying to keep them out.The video has been used by the Zionist press as a means of propaganda to show the kindness and the courtesy of the soldiers, contrary to the ‘violence’ of Ahed. Of course, the blocking action costed her the arrest. This morning, at 4, the Israeli armed forces stole the family’s cameras and telephone, beat the son, and arrested Ahed. No explanation has been provided about the case.

Furthermore, later in the morning, when her
mother Nariman went to Benjamin police station, to ask for the daughter and the charges, the Israeli army’s reponse was to arrest her. The family still does not know anything about the evolution of the situation.

Meanwhile, this afternoon, Israeli soldiers kept on shooting tear gas and rubber-coated steel bullets at people protesting at the checkpoint at the entrance of the village.