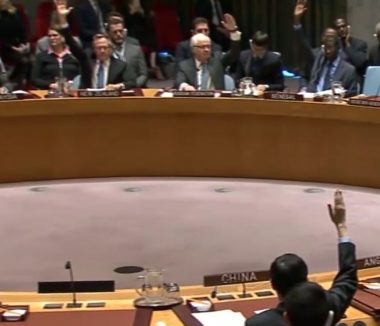 His statements came in a speech, delivered by various main Israeli TV station, in which he said that the Security Council resolution is “anti-Israel,” and “hypocritical.”

“Nobody can impose any international resolutions against Israel,” he added, “Before Obama, the U.S had another President, Jimmy Carter, who has said that Hamas is not a terrorist organization.”

“Every sitting American president made sure that no Security Council resolutions are imposed on Israel,” Netanyahu stated, “But the Obama administration have broken this tradition by not vetoing it.”

The Israeli Prime Minister also claimed that the latest resolution “does not help advance the peace process, but harms justice and the truth.”

He also said that this resolution will fall once the new U.S administration, under president-elect Donald Trump takes office.

Netanyahu announced a serious of punitive measures against the United Nations, including halting the transfer of 30 Million Shekels allocated for five U.N-affiliated agencies.

He accused Obama of colluding with the United Nations, and said that his government looked forward to cooperating with the upcoming administration of Donald Trump.

The Israeli Ambassador at the UN, Danny Danon, said he was also “angered” by the resolution, and issued a statement strongly denouncing the role of the Obama administration in allowing it to pass.

The Security Council resolution passed by 14 votes, zero against it, while the U.S. abstained. A U.S. veto would have meant overruling the majority vote and toppling the resolution.

Samantha Power, the U.S. Ambassador at the United Nations, said her country would not have allowed this resolution to pass if it felt it had not succeeded in tackling the “counterproductive steps by the Palestinians”.

Power also said that abstaining from the vote “does not diminish the unparalleled and steadfast American support for and commitment to the security of Israel.”

President-elect Donald Trump said in a tweet that “things will be different after January 20th”, referring to when he officially takes office.

All of Israel’s colonies in the occupied West Bank, including in and around occupied East Jerusalem, are illegal under International Law, and the Fourth Geneva convention, to which Israel is a signatory.