Netanyahu’s Billionaire Backer May Help Bring Him Down (VIDEO) 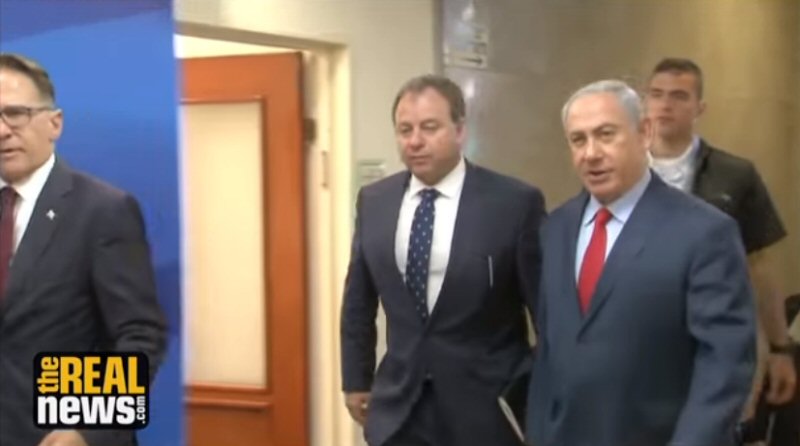 AARON MATE: It’s The Real News. I’m Aaron Mate. Israeli Prime Minister, Benjamin Netanyahu, is known as the magician for his ability to survive political scandal, but is the stage now being set for his removal? That’s the question as a corruption case grows. Ari Harow, Netanyahu’s former Chief of Staff, has agreed to be a state witness in an ongoing probe of bribery and fraud. This raises the chances that Netanyahu will face criminal charges. Shir Hever is a Real News correspondent and he joins me now from Germany. Welcome, Shir.

SHIR HEVER: Thanks for having me, Aaron.

AARON MATE: Thanks for joining us. There are a few different corruption cases going on involving Netanyahu. Can you lay out for us what they are?

SHIR HEVER: Well, the first case, known as Case 1000, is about receiving various gifts and not only for Netanyahu himself, but also for his wife Sara Netanyahu from millionaires and billionaires in exchange for various gestures or leniency in taxes that Netanyahu arranged for them, allegedly. This case is currently not really advancing and we haven’t heard much news from.Case 2000, the second case, is the one, which is now the most burning case and Ari Harow signed the deal to become a state witness of that case. This is a case about Netanyahu manipulating the media, meeting with the head of the largest newspaper in Israel, the Yedioth Ahronoth, in order to offer some kind of deal that if the newspaper will give Netanyahu good coverage or positive coverage, Netanyahu will place restrictions on its biggest competitor, which is known as Israel Hayom or Israel Today, a newspaper, which is funded by Sheldon Adelson, the American billionaire. This is now the case for which Ari Harrow decided to testify.The third case is still under investigation and that is the case of the submarine and patrol boat deal with the German company, ThyssenKrupp, and the nephew, sorry, the cousin of Netanyahu. His name’s David Shimron; is also the lawyer of Netanyahu and he is currently under house arrest. There is also a state witness with that case because the state witness who was the representative of the German company, ThyssenKrupp, has received an exorbitant commission from the German company and apparently there are suspicions that he used that money to grease the wheels within the Israeli system to buy those German submarines and that could even reach Netanyahu himself.

AARON MATE: Okay, let’s talk more about this media angle because it’s quite fascinating. Netanyahu was recorded having these discussions right? Trying to negotiate favorable coverage for Yedioth Ahronoth? Is that right?

SHIR HEVER: Yeah, and Noah Mozes, the owner of Yedioth Ahronoth, he’s very well known for being mixed in politics and he makes decisions which politicians would receive good or bad coverage. In fact, one of his regular columnists is now one of the leading politicians in Israel and a possible, a politician to replace Netanyahu if Netanyahu resigns, Yair Lapid. Now the two have talked to each other and there was a recording that was leaked and according to this recording, Netanyahu offered to place restrictions on the competing newspaper. Netanyahu then claimed after the conversation was leaked that he was laying a trap for Mozes and that he had intention of actually following through. However, Sheldon Adelson himself gave testimony to the Israeli police and according the reports, which the police is not confirming yet, Sheldon Adelson said, “Yes, Netanyahu came to me and asked to cancel the weekend edition of my newspaper, Israel Hayom, Israel Today.”Now if that is true and the weekend edition is the most profitable part of the newspaper and the Yedioth Ahronoth is very much fighting for that issue because they want people to buy their newspapers for the weekend so if that is true that is enough to prove that yes, there has been a bit quid pro quo. There has been a deal and Netanyahu is the complicit, but in Israel you have to remember it’s not just about the law, it’s about the politics.The police will not press charges, will not recommend to press charges and the state attorney will not actually press charges unless there is enough pressure and unless they have absolute certainty that they are going to win the case and actually convict. Now when there is a state witness who is the former chief of staff of Netanyahu so obviously somebody with access to all the needed information then that kind of clinches it and the Israeli media is going under the assumption that the police would never have signed a state witness document unless they were sure that they could convict.

AARON MATE: Shir, can you just help me clarify this a bit because it’s a bit confusing because Sheldon Adelson, who you mentioned, who owns Israel Hayom has been a major supporter of Netanyahu, right? Here we have a case where Netanyahu is apparently negotiating with one of Adelson’s rivals, the owner of different newspaper.

SHIR HEVER: This comes out very clearly in this recorded conversation because Netanyahu is trying to dodge and say, “Well, you know, the redhead is not going to like it.” The redhead is code for Sheldon Adelson and Noah Mozes is saying, “Well, I’m sure you can legislate or arrange for it to be legislated in the Israeli Parliament, the KNESSET.” Netanyahu says, “Well, I’ll have to talk to him first.” This is how you see that the relations between Adelson and Netanyahu; they also have some tensions. There’s also some limitations to their friendship. Adelson has a very clear agenda of what kind of leadership he wants for Israel. He’s an extremely right-winged Zionist. I think he is not very happy with the fact that Netanyahu is actually the kind of Prime Minister who seeks political power at all costs and that also means he’s willing to make compromises on ideological issues.The issue of moving the American Embassy from Tel Aviv to Jerusalem, which President Trump promised to do, but never did is something that Adelson was pushing for very strongly. Netanyahu actually pretended to be pushing for it, but didn’t really want it to happen because he didn’t want all of the consequences of such political provocation. This is one of the reasons why they are not on such good terms as they were before.

AARON MATE: Members of Netanyahu’s party are slowly rallying around him. What has been the reaction so far overall in Israel to this case and do you think actually that criminal charges are going to be filed against Netanyahu?

SHIR HEVER: I think it’s very likely that charges will be filed against Netanyahu, but the supporters of Netanyahu are rallying around him, not slowly, but very, very fast. This is the peculiar thing because in the past and we’ve seen this with the previous Prime Minister of Israel, Ehud Olmert. When it became clear that charges are going to be pressed against him, all of his close friends turned on him. They immediately started fighting about the line of succession and that is what I also expected to happen in Netanyahu’s cabinet. Instead, we see the Minister of Justice, Ayelet Shaked, claiming that even if charges are pressed against him, he does not have to resign, which is in violation of the precedent set by the Israeli Supreme Court, but Ayelet Shaked as the Minister of Justice, has a different interpretation. She’s not even from his own party, but she still supports him and wants him to stay in power. This is a very curious thing. I think the left in Israel or the center left, the opposition, they’re really calling for him to resign and they have some faith, which I think is completely misplaced that they could replace him with their own Prime Minister and somehow form a more lefty coalition.All of the polls speak a different story. All of the polls say that the Israeli public continues to be extremely right winged. Palestinians under military occupation cannot vote in the elections so their vote doesn’t count, but the colonists in the West Bank can vote. They vote for the right, which means that the next Prime Minister after Netanyahu is probably going to be even more right winged. Yet, those right wingers are still supporting Netanyahu. They’re expressing a lot of fear that if Netanyahu will resign maybe the government will change. Netanyahu has really entrenched himself in the Israeli politics so well that even the people who stand to gain from his removal are now protecting him.

AARON MATE: Finally, Shir, I’m wondering how this scandal is impacting Netanyahu’s policies. In times of political crisis and scandal, leaders often turn to making moves that drum up support from their base or they turn to launching overseas wars. In the case of Netanyahu, we’ve seen him recently propose banning foreign NGO’s, call for the death penalty for Palestinians. His minister recently called for banning Al Jazeera. I’m wondering if you think that there’s a connection between this scandal and policy choices that Netanyahu has made recently.

SHIR HEVER: Well, this is not new. Netanyahu’s entire political agenda is based on fear and cheap populism, racist statements against Palestinians. This is how he got into power and he’s using that again to stay in power, but the Real News has been covering quite a lot the story of the Al-Aqsa protests and all of these provocations by the Netanyahu government that started this mass protest and cost the lives of many people. In the social media, Israeli’s call these protests the submarine [inaudible 00:10:40], which is a kind of joke to say well, Netanyahu is deeply sinking into these corruption cases that he’s starting another war or another confrontation in order to rally people around him. This is exactly what he’s doing in these dire straits for his political administration, but I think it’s not having a lot of effect the Israeli public. The Israeli public is very apathetic about politics in general and they don’t seem to care so much about the corruption or about the occupation. They care about mainly economic issues and so they’re going to vote for the right wing even if Netanyahu is pressed the [inaudible 00:11:28] charges.

AARON MATE: Thank you for joining us on The Real News.

Also of interest: 08/09/17 Sara Netanyahu to be Indicted for Fraud and Misuse of Public Funds