Occupation Captured: Photos of Palestinian Life and Israeli Occupation in the West Bank City of Hebron. 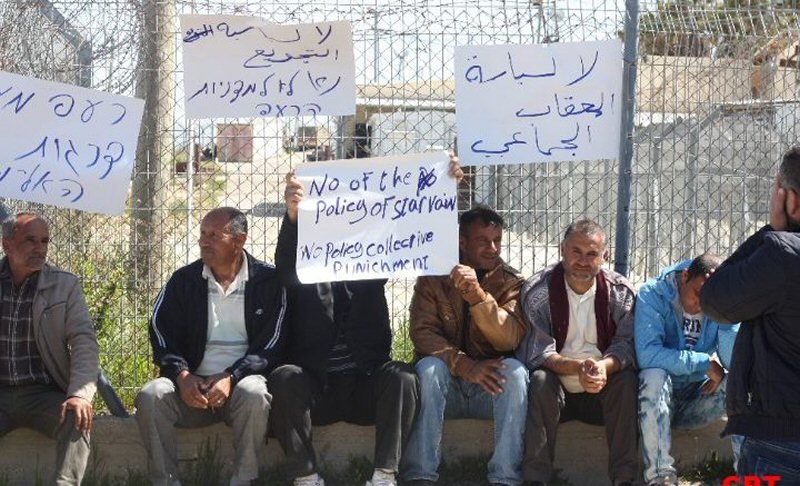 Pictured here:  A local man from al-Khalil was arrested for two hours. Initially stopped outside one of the checkpoints, the man was then taken to the Israeli military base. The Prisoners and Liberties Affairs Association, Palestinian Prisoners Club, Addameer Prisoner Support and Human Rights Association, and Al Mazen Center for Human Rights found that 140 Palestinians living in the al-Khalil municipal area were arrested between January and February of this year.

Pictured here:  On Wednesday morning, several Palestinians had gathered for a sit-in outside the Israeli District Coordination Office (DCO) south of al-Khalil. Israeli DCO is where Palestinians go to apply for permits to exit the West Bank. Most common are permits related to work, medical treatment or to see family. The sit-in was in support of Palestinians who are denied permits because a person from their extended family is being accused of a crime committed in ’48 (today’s illegal borders of Israel). For example, the extended family of a Palestinian man who was accused of committing a crime in Tel Aviv, two years ago, are still unable to receive permits to travel. This ban now affects thousands of family members, an instance of collective punishment. Collective punishment is a violation of International Law.

Pictured here: On March 3, 2018, 15 Israeli settler families who have been occupying the Abu Rajab building in al-Khalil were given two weeks notice to evacuate the building. The Israeli High Court of Justice made this decision, ruling that the settlers could not be in the building prior to the registration of the property under the Israeli Civil Administration. The Israeli settlers also requested that the Palestinian Abu Rajab family be forcibly removed from their home, which has historical documentation of their ownership to the land and building. The settlers’ request was denied by the High Court.

Pictured here:  On Thursday, members of Christian Peacemaker Teams (CPT) revisited Ali, the 11 year old boy who fell from his three-story home when he was chased by Israeli soldiers. Ali is home from the hospital with a metal plate in his left arm. He has casts on his arms and right leg. He is still waiting for a surgery of his jaw, and for the dentist to give him new teeth so that he can eat and speak again. Beyond Ali’s physical suffering, he will also miss two months of his education in school and fears that the soldiers are at his doorstep every time he hears a knock on the door or commotion outside his window. To read more about Ali, click here.

Pictured here: Salaymeh checkpoint, one of the checkpoints CPT monitors every morning as children go to school, has been used as a place to train new Israeli Border Police officers. During their training, soldiers collectively punish Palestinian school children by halting their commute to school. Here, children walk to school while three Border Police officers march down the street, indiscriminately firing two teargas canisters at the children. The children are forced to run through clouds of gas to get to school.

This photo essay was originally published by Christian Peacemaker Teams – Palestine and edited for the Alternative Information Center (AIC).