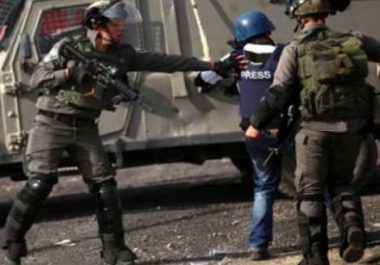 The Palestinian Authority’s Information Ministry sent a letter to the International Federation of Journalists (IFJ) complaining about the preliminary Israeli Knesset proposal, which passed the first reading, forbidding journalists, and ordinary residents, from filming and documenting Israeli invasions and military activities in occupied Palestine.

The new bill passed the first reading in a 45-42 vote and aims at outlawing filming the soldiers with what is described as “the intent to demoralize them, or harming Israel’s security.”

The new law allows the army to abduct and imprison those “who violate the law” up to five years, “if the documentation harmed the soldiers’ fighting spirit.”

It also calls for imprisoning the Palestinians for ten years if “they filmed the soldiers with the intent to harm Israel’s security.”

The Information Ministry sent a letter to Philippe Leruth, the elected head of the IFJ, and members of its executive committee, calling on them to intervene.

It said that the new Israeli law is not only racist, but also targets every Palestinian, and every journalist, who documents Israel’s invasions, criminalizes Palestinian journalists, and prevents them from performing their duties, in direct violation of all related International Laws and regulations, especially the Freedom of the Press.

The Ministry added that the law also violates UN Security Council Resolution #2222, which provides protection to the journalists, and stated that Israel is giving its soldiers a free hand in assaulting and arresting the journalists just for performing their duties, and targets the residents who have the right to document the invasions.

“This also gives the army more opportunities to commit massacres and terrorist attacks against the Palestinians,” it said, “This law was drafted first after Israeli soldiers, stationed in fortified posts across the border fence with Gaza, were filmed cheering and celebrating the shooting a Palestinian child with sniper fire.”

BDS (Boycott, Divestment and Sanctions) activists, in addition to local journalists and social media activists, are documenting the invasions, serious violations. They are documenting crimes committed by the Israeli army with direct support from the political leadership in Tel Aviv.

Several political analysts in Palestine, and Palestinian solidarity activists, said that the new Israeli law is yet another proof that Israel fears the truth, especially since its army has been caught on video so many times, committing serious violations and crimes against unarmed Palestinian protesters, and the civilian population.

They added that this law, which violates every related international law and agreement, would have been described as a form of dictatorship if it was enacted by other countries.

In its letter, the Information Ministry said:

Palestinian Journalists are facing ongoing Israeli aggression, and are paying a high price due to these violations, resulting in the recent deaths of two journalists, Yasser Mortaja and Ahmad Abu Hussein, who were killed by the army in Gaza, this past April.

After Israel released the Elor Azaria, the 19-year-old Israeli soldier who executed the seriously wounded Palestinian, Abdul-Fattah Sharif, and was pardoned and released just nine months after committing his crime, in which he was only sentenced to 18 months in prison, and after Israel arrested and interrogated the Palestinian journalist, Imad Abu Shamsiyya, who was also subject to constant violations for documenting this crime, Tel Aviv now wants to criminalize, and imprison the journalists for performing their duties, for exposing the violations.

The new draft law, which was presented by Member of Knesset Robert Ilatov of “Israel Our Home Party,” with full the backing of Israeli Prime Minister Benjamin Netanyahu, is meant to prevent the media, and the people, from documenting the ongoing Israeli crimes against the Palestinians, and grants the army a green light for more violations.

This law also threatens foreign media agencies and journalists, and is meant to terrorize them, to force them to refrain from documenting the army’s violations in occupied Palestine.

This law requires all of us to act, all around the world, and requires immediate intervention from the IFJ to protect the sanctity of the media and its freedoms, as stated by all related International Laws and regulations.

It is worth mentioning that Ilatov attacked the BDS Movement (Boycott Divestment and Sanctions), considering it hostile to the army and stating that the soldiers “are sent to the front lines of BDS groups,” in an attempt to label the nonviolent BDS activists as “combatants.”

Ilatov also said that the Israel “will not allow the BDS Movement and its supporters to slander Israel and dehumanize its soldiers.”