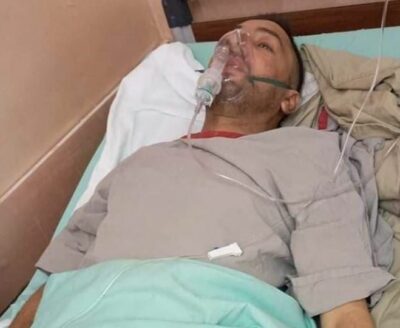 The Palestinian Detainees and Ex-Detainees Committee stated, Friday, that a political prisoner, held by Israel, is facing profoundly serious health complications at the Ramla prison clinic, which lacks specialists and adequate machines.

The Committee stated that the detainee, Nidal Abu ‘Ahour, 45, from Bethlehem, south of occupied Jerusalem in the West Bank, was diagnosed with kidney failure more than ten years ago.

The detainee also has a tumor in his kidney, high blood pressure in addition to serious respiratory issues making him dependent on oxygen.

Nidal, a married father of seven children, was abducted by the soldiers a month ago, only a few months after his release from prison, and was sentenced to one year in prison.

He is also a former political prisoner who was held for 14 months under the arbitrary Administrative Detention orders without charges or trial.

The Committee warned that Abu Ahour could die if he does not receive professional medical treatment and called for his release.

On November 10, 2020. detainee Kamal Abu Wa’er, 46, died of COVID-19, following years of severe medical neglect of his cancer by Israeli Prison Authorities. He suffered from throat cancer, and his health condition witnessed a serious deterioration after he became infected with the coronavirus.

Throughout the years of imprisonment, he has faced numerous health complications, including a heart attack a few years ago, in addition to undergoing open-heart surgery.

On April 22. 2020, detainee, Nour Jaber Barghouthi, 23,  from ‘Aboud town, northwest of the central West Bank city of Ramallah died in the Negev Desert Detention Camp, after fainting in the shower, and Israeli soldiers failed to provide him with any medical aid for more than thirty minutes.

Barghouti was abducted by the soldiers four years prior to his death and was sentenced to eight years in prison.

On November 26, 2019, detainee Sami Abu Diak, 37, died at an Israeli hospital after he was systematically denied specialized medical care, leading to serious complications that resulted in his death.

Article 91 of the Fourth Geneva Convention states “Every place of internment shall have an adequate infirmary, under the direction of a qualified doctor, where internees may have the attention they require, as well as an appropriate diet. Isolation wards shall be set aside for cases of contagious or mental diseases.”

Article 92 of the same convention states “Medical inspections of internees shall be made at least once a month. Their purpose shall be, in particular, to supervise the general state of health, nutrition, and cleanliness of internees, and to detect contagious diseases, especially tuberculosis, malaria, and venereal diseases. Such inspections shall include, in particular, the checking of weight of each internee and, at least once a year, radioscopic examination.”