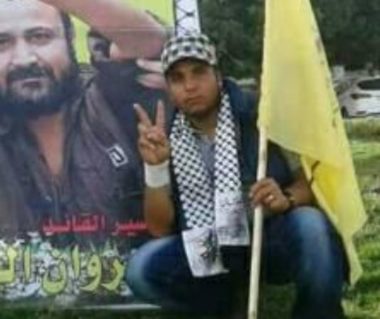 The Palestinian Health Ministry has reported that a young Palestinian man died, on Saturday at dawn, from serious wounds he suffered, on Friday October 26th, after Israeli soldiers shot him during the Great Return March protests, in the Gaza Strip.

Dr. Ashraf al-Qedra, the spokesperson of the Health Ministry in Gaza, said the Palestinian has been identified as Yahia Bader Mohammad al-Hasanat, 37.

He added that al-Hasanat, from the al-Mighraqa village in Gaza’s Central District, was shot with a live round in the head, east of the al-Boreij refugee camp, and remained in a critical condition until he succumbed to his wounds.

On Saturday at dawn, a young man, identified as Mojahed Ziad Zaki Aqel, 23, died from serious wounds he suffered Friday, east of the al-Boreij refugee camp, in central Gaza.

It is worth mentioning that the soldiers killed, Friday, killed four Palestinians, and injured 232 others, including 180 who were shot with live fire. The slain Palestinians have been identified as Nassar Eyad Abu Tayyim, 19, Ayesh Ghassan Shaat, 23, and Ahmad Sa’id Abu Libda, 22, and Mohammad Khaled Mahmoud Abdul-Nabi, 27.