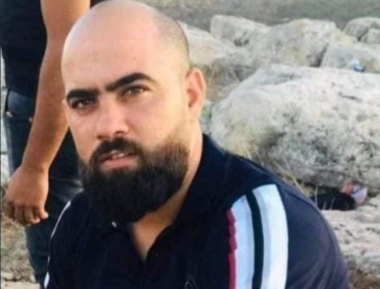 The Palestinian Health Ministry has reported that a Palestinian man died, Thursday, from serious wounds he suffered, two days earlier, after an Israeli soldier shot him with a live round in the head near Jenin, in northern West Bank.

It stated that the Palestinian, identified as Montaser Mahmoud Zeidan Jawabra, 28, suffered life-threatening wounds before he was rushed to surgery after he was shot, and remained in the Intensive Care Unit at the ar-Razi hospital in Jenin until he succumbed to his wounds.

The slain Palestinian man, from Um Dar village, near Ya’bad town, west of Jenin, was a married father of two children, the oldest is 4. He was among the dozens of Palestinians who were shot by Israeli army fire, Tuesday, including many who suffered serious wounds, during protests that took place in several parts of the occupied West Bank, in condemnation of the ongoing Israeli onslaught on the Gaza Strip, and the serious escalation by the soldiers and the colonialist settlers against the Palestinians, in occupied Jerusalem, and many parts of occupied Palestine.

On that day, the army killed four Palestinians in the West Bank and injured more than 243 others.