Palestinian Dies From Wounds He Suffered Last Friday In Gaza 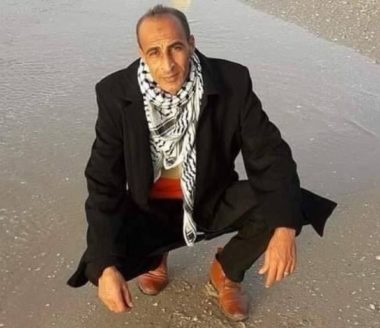 The Health Ministry in the Gaza Strip has confirmed that a Palestinian man died, Tuesday, from serious wounds he suffered, last Friday, after Israeli soldiers shot him during the Great Return March Procession.

The Health Ministry stated that the man, Samir Ghazi Nabahin, 47, was shot with a high-velocity gas bomb in the face, east of the al-Boreij refugee camp, in central Gaza.

It added that Nabahin was rushed to the Shifa Medical Center in Gaza, and received the urgently needed medical treatment, but remained in a critical condition until he succumbed to his wounds.

Also on Tuesday, the soldiers shot at least fourteen Palestinians with live fire, and caused eleven others to suffer the effects of teargas inhalation, during the nonviolent naval procession near the shore of Beit Lahia, in northern Gaza.

The Health Ministry stated that one of the wounded Palestinians suffered a serious injury prior to the procession, while driving a bulldozer at the shore area in Beit Lahia.

The army and the navy fired many live rounds, in addition to gas bombs and concussion grenades at the boats, and the shore.

Furthermore, the soldiers shot a farmer while working on his land, in Beit Lahia, causing a moderate injury, before he was rushed to the Indonesia Hospital.