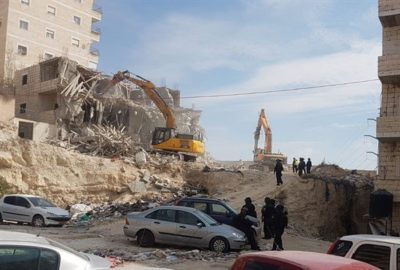 A four-story apartment building, home to twelve people in two families, was destroyed Wednesday by a battalion of around 300 Israeli soldiers who stormed the Shu’fat camp in Jerusalem with a number of armored D9 Caterpillar bulldozers, turned the street into a temporary military base, and smashed the homes to smithereens.

The building destroyed on Wednesday was located near the site of the Israeli Annexation Wall in Shu’fat, East Jerusalem, and included 12 apartments and a garage.

The owner, Mahmoud Jaradat, told Ma’an news reporters that the building cost him three million shekels, $817,237, to construct. That money is all lost, as Israeli authorities provide no compensation to the Palestinians whose homes they demolish – and instead, often bill the Palestinian owners for the cost of demolition.

He was issued a demolition order eight months ago, but Jaradat’s lawyer had appealed the case. Despite the fact that the appeal was active, Israeli forces went ahead with the demolition.

The Israeli Committee Against House Demolitions noted in its most recent report for the month of October 2018, at least 50 structures were demolished by Israeli forces in the occupied Palestinian Territories (including East Jerusalem) in the month of October, displacing at least 50 people- including 21 children- and affecting a further 203 people, including 92 children. Inside Israel, in the Naqab desert, Israeli forces demolished the unrecognised Bedouin village al-Aragib for the 134th time.

All the demolitions and confiscations occurred on grounds of lacking an Israeli-issued building permit.

The United Nations Office for the Coordination of Humanitarian Affairs (OCHA) noted that in recent decades, Israeli colonial settler organizations, with the support of Israeli authorities, have taken control of properties within Palestinian neighborhoods in East Jerusalem, and 180 Palestinian families are currently facing eviction cases, filed mainly by Israeli paramilitary settler organizations.