Palestinian Hospitalized After Israeli Soldiers Assaulted Him In Jerusalem 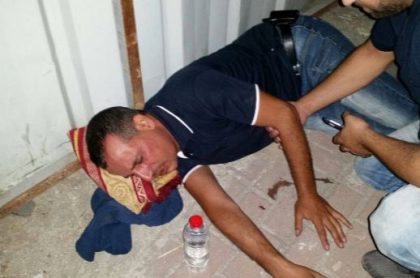 A Palestinian man was moderately injured, on Thursday evening, after Israeli soldiers repeatedly assaulted him in Ein al-Louza neighborhood, in Silwan town, in occupied East Jerusalem.

The Wadi Hilweh Information Center in Silwan (Silwanic) said dozens of soldiers invaded Ein al-Louza, the al-Wista neighborhood, and Torbet as-Sawahra area, attacked many young men, and questioned them in a provocative manner.

Shortly after that, some youngsters hurled fireworks at the invading soldiers, while the army closed Ein al-Louza and all main roads in the area, causing a traffic jam.

Silwanic added that the soldiers stopped a young man, identified as ‘Ala Qara’in, 45, and started beating him up, in addition to clubbing and kicking him, causing various cuts and bruises, in addition to shortness of breath, eventually causing him to faint.

Many Palestinians tried to rush to the rescue of the wounded Palestinian, but the soldiers assaulted them before an ambulance arrived at the scene and took him to Hadassah Ein Karem Hospital.

The soldiers also broke into many homes belonging to al-Abbassi and Rajabi families, and assaulted several young men, in addition to hurling concussion grenades into the alleys.