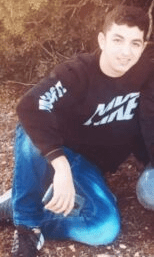 The Palestinian Health Ministry has confirmed, Tuesday, that a Palestinian teenager has died from Israeli fire, near Salfit, in the central West Bank, after the army claimed he attempted to stab soldiers.

The teen, identified as Atallah Mohammad Rayan, 17, from Qarawat Bani Hassan town, northwest of Salfit, was shot dead by Israeli forces after he allegedly attempted to stab a soldier at Giti Avishar junction near the illegal Ariel colony. The reported incident did not lead to any injuries among the soldiers, while the army said “it is investigating the attack.”

The Palestinian WAFA News Agency has reported that the teen was shot with several rounds, while soldiers made no attempt to provide first aid, and the child was left to bleed out until he succumbed to his wounds.

According to eyewitness testimony.

“At around 11:30 a young Palestinian man was crossing the roadblock, soldiers attacked and shot him, they hit him, he scuffled with soldiers after they fired at him, they forced him on the ground, then they hit him on his head with their guns, most likely this is what killed the young man, because they struck him on the head multiple times, they busted his head open, they shot and injured him first, then beat him to the ground and assaulted him and hit him on his head, this is what killed him.”

After killing the young man, the soldiers invaded Qarawat Bani Hassan, the hometown of the slain Palestinian, leading to protests.

The soldiers fired many gas bombs, concussion grenades, and rubber-coated steel bullets at the protesters, causing many to suffer the effects of teargas inhalation.

The soldiers also stormed and ransacked the family home of the slain Palestinian, ransacked the property, and interrogated his family.