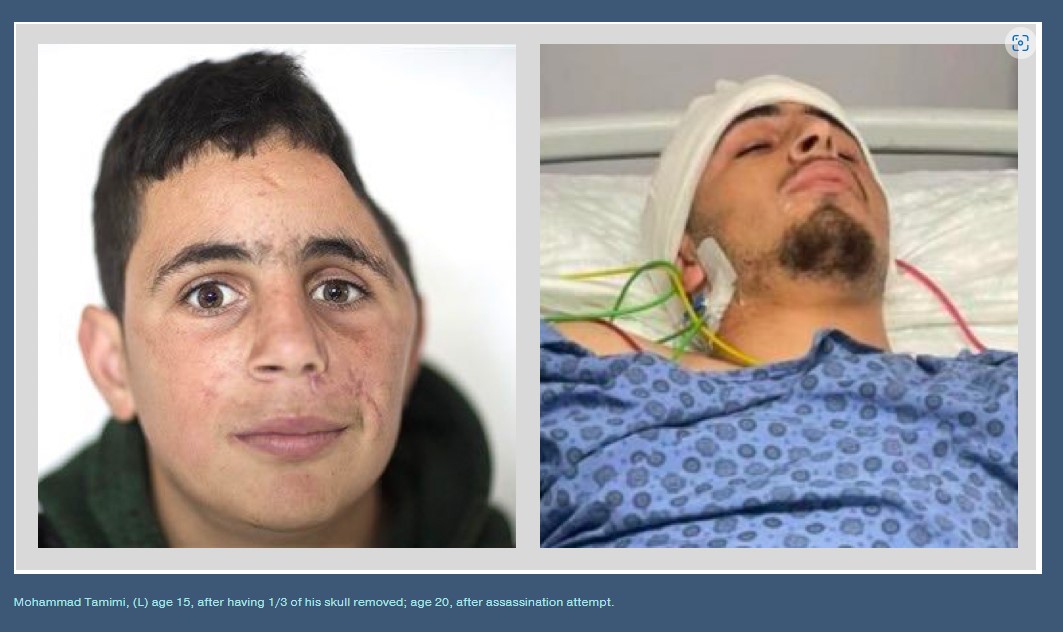 By Kathryn Shihadah – Palestine Home: A young Palestinian man was the target of an apparent (failed) assassination attempt by Israeli soldiers last week.

His name is Mohammad Fadel Tamimi, and he is twenty years old. While the Israeli military shoots – and often kills – young Palestinian men every day, this particular young man has an especially harrowing history.

Mohammad has spent his whole life in Nabi Saleh, a village that has for years led in the Palestinians’ nonviolent resistance against Israeli occupation. The Tamimi family presides over the effort, calling for protests, speaking out internationally, modeling their efforts on the work of Martin Luther King, Jr.

These efforts torment Israel no end – so Israel’s military has tormented Nabi Saleh and the Tamimi clan for years.

Mohammad Tamimi’s backstory with Israel is epic and excruciating. Last week’s incident was just the latest in a series of disturbing events.

Last Thursday evening, Mohammad was walking with his thirteen-year-old brother Laith, when Israeli soldiers began shooting at them (they had already shot at Mohammad earlier in the day, lightly injuring him in the arm and abdomen).

To be clear: he was not participating in a protest or threatening the soldiers in any way – just walking with his little brother.

Mohammad is a familiar face – all of the soldiers know him. So when he was hit in the forehead with a sponge-coated steel bullet, and his brother was hit in the arm, fracturing bones, it was not by accident.

Apparently thinking Mohammad was dead, the soldiers began kicking him, and were about to carry him away (a common practice in the Israeli military) when neighbors who had heard the shots intervened.

Mohammad was rushed to the hospital with a fractured skull and severe bleeding (sponge- and rubber-coated bullets are more dangerous than they sound).

While he is now stable, and appears able to hear and understand, he has not spoken since the day of the injury.

I spoke with a relative of Mohammad’s on Wednesday, six days after the shooting. She reported that he was able to take a few steps and use his hands, but his speech has not yet returned – whether it is due to damage caused by the bullet, or psychological trauma, is not yet known.

When asked whether anyone from the Israeli military had reached out to the family to discuss the incident, she responded,

No. Even if they tried, the family and everybody in the village would refuse [to talk to them]. You can’t begin a dialogue with someone who will kill you the first chance he has, or someone who is stealing your lands, and of course, [if] he is denying your existence.

One piece of good news in this calamity is that the Palestinian Authority (PA) will be covering Mohammad’s medical bills.

In reality, however, the policy is a social safety net – the kind needed by a population under brutal occupation. When Israel’s actions land a Palestinian in prison or the hospital – or the cemetery – the PA can step in to keep the family from financial ruin (read more about it here).

It remains to be seen how extensive Mohammad’s injuries are, and whether recovery is possible, but at least his medical bills will not bury his family in debt.

Last week’s shooting was just the latest in a string of shocking events for Mohammad over a six-month period in late 2017 and early 2018. Each of them has been life-changing; together, they are devastating.

A group of Israeli soldiers lounged (illegally) in an empty villa in Nabi Saleh. Heavily-armed soldiers are a constant presence in the village – a reminder to the residents that they are under constant scrutiny.

Fifteen-year-old Mohammad Tamimi and some friends let curiosity get the best of them that day: Mohammad peeked over a wall to see what the soldiers were doing. When they saw his head just a few yards away, they shot at it.

The bullet entered near Mohammad’s nose and lodged in the back of his skull; he was bleeding heavily. A Red Crescent ambulance rushed in.

The soldiers at first blocked the ambulance from leaving (not at all uncommon in the Israeli military), but eventually Mohammad made it to the hospital.

Doctors removed part of his skull due to severe inflammation of his brain, and extracted the bullet fragments.

“The slap that was heard around the world”

Moments after the shooting, his cousin Ahed heard the news. Furious, she screamed at an Israeli soldier (again, heavily armed) loitering on her property and delivered “the slap that was heard around the world” – a light smack (video) that turned into a PR nightmare for Israel.

Israeli politicians (who had no comment about the bullet in the face) declared Ahed’s slap “damaging to the honor of the military and the state of Israel”; suggested that she “spend the rest of [her] days in prison”; and declared that she “should have gotten a bullet, at least in the kneecap.”

Later, Ahed would be charged with five counts of assault and serve an eight-month sentence.

Apparently the Israeli soldier who had shot her cousin faced no consequences.

Two months later, in a midnight raid on the village of Nabi Saleh, Mohammad Tamimi and nine other Palestinian youths (five of them, including Mohammad, minors) were arrested for alleged stone-throwing.

His parents begged the police to delay the arrest a few weeks, till after the surgery to reconstruct his skull. His interrogators were unmoved. His parents asked the soldiers to let him take his medicine, or he might die, they replied that they wouldn’t care if he died.

After hours of high pressure questioning (Mohammad asserts that he was beaten), Mohammad “confessed” that his severe head injury had been self-inflicted – from a bicycle accident.

A top Israeli military leader rejoiced on Facebook the next day, “Wonder of wonders. Today, the boy himself confessed…that in December his skull was injured when he was riding his bicycle.”

Both Israeli and American media saw through the fraud immediately. On the same day as the Facebook post, the Washington Post published an article entitled “How a Palestinian teen’s rubber bullet injury to the brain turned to a biking accident overnight”; Ha’aretz produced a piece called “How the Israeli army got a teen who was shot in the head to say he fell off a bike.”

In short order, Mohammad’s doctor issued documents, including an X-ray of his skull with the bullet lodged inside. Thirty or so eyewitnesses also attested to the fact that he had been shot.

As another of Mohammad’s relatives told me, Mohammad’s very existence is an embarrassment to Israel – a constant reminder that their military shoots children.

Israeli leaders concocted the bicycle story to counter the truth, and even though (almost) no one believes it, Israel has managed to save face.

No one in the village saw the abduction; when he turned up missing, the family feared he had fallen and was hurt. The whole village searched for him to no avail.

Around 11 pm – hours after he was supposed to break the Ramadan fast with his family and take his medication – Mohammad reappeared.

Israeli intelligence informed one of Mohammad’s doctors that Mohammad would be re-arrested once he recovered.

It has been just over four years since Mohammad’s crisis. His life is forever altered. As a relative explained, he has trouble concentrating, and sometimes loses the ability to talk. He can’t function without his medication.

A group in South Africa raised funds to enable Mohammad to have reconstructive surgery. This made a big difference in his appearance, but he still struggles on many levels.

Mohammad has tried his hand at various simple jobs, but his health issues have made every one of them impossible.

He has, however, been a regular participant in Nabi Saleh protests against the occupation.

He stands at the front of the crowd, daring the Israeli soldiers to look at him and remember what they did. He will not let them forget that they shoot children.

A couple of years ago, a soldier informed Mohammad that Israel would be coming after him to kill him. They tried again last week.

But Mohammad Tamimi refuses to die.