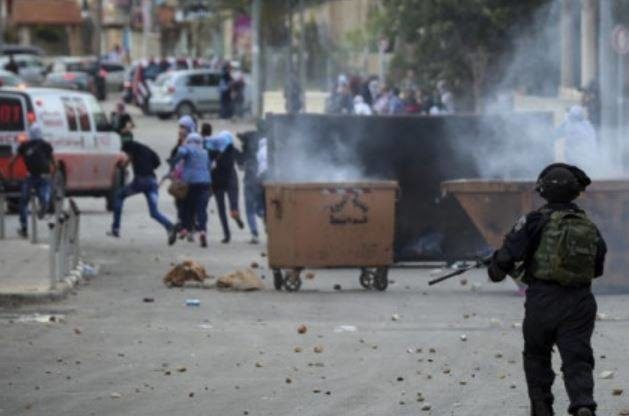 Soldiers attacked many Palestinian residents of Hebron, on Monday, as they marched against the Israeli colonialist plans in the city, dozens of injuries, mainly due to teargas inhalation, were reported.

A general strike was held, on Monday, in the southern West Bank city of Hebron, in protest against Israeli settlement plans in the occupied section of the Palestinian city, according to the Palestinian News and Info Agency (WAFA).

The strike, called for by President Mahmoud Abbas’ Fatah movement, came following the revelation of plans to build a new settlement in place of Hebron’s wholesale market in the old section of the city.

Fatah said that it will do all it can to stop the Israeli measures in Hebron, as well as Israel’s targeting of the Ibrahimi Mosque, confiscation of Palestinian land, and demolition of Palestinian homes in an effort to change the facts on the ground.

A section of Hebron, referred to as H2 and which includes the old city and the Ibrahimi Mosque, remained under Israeli military control following the signing to the Oslo accords while the rest of the city, referred to as H1, came under full Palestinian control.

In order offset the status of the largest West Bank city, Israel seeks to turn the handful of settlements in the old section of Hebron into a large settlement bloc.

According to B’Tselem about 34,000 Palestinians and 700 settlers now live in the H2 section of Hebron, with an estimated 622,670 settlers total, throughout the West Bank.

The 4th Geneva Convention states; “The Occupying Power shall not deport or transfer parts of its own civilian population into the territory it occupies.”