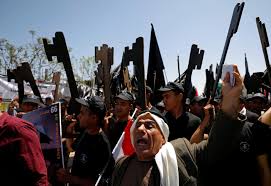 Back in September of the year 2000, the then-Israeli opposition leader Ariel Sharon made a provocative visit to Haram al-Sharif, or Temple Mount, in Jerusalem al-Quds, along with hundreds of Israeli forces, in a move widely denounced by Palestinians.

The visit triggered a popular uprising, against Israel, in which several thousand Palestinians were killed and many more were injured before the uprising ended in February of 2005, following a truce.

Press TV/Al Ray reports that, on Sunday, Palestinian political figures took part in a seminar to remember the Intifada. Palestinians believe the Intifada is still ongoing, as they are not hesitant about sacrificing their lives in defending Palestine.

They say that resistance is the only means for Palestinians to protect Jerusalem al-Quds from Israeli violations.

Palestinians say they are determined to defend Jerusalem al-Quds by all means and at all costs. In Gaza, people stage weekly rallies to demand their right of return to the homeland.

Israeli forces have killed hundreds of protesters during the weekly rallies, so far, and injured many more.

Citizens say that Israel’s violations and its use of excessive force, against peaceful protesters, won’t stop them from speaking out against Israeli crimes. They say that the Intifada is still alive in their hearts and minds, and that they will continue to defend their rights.