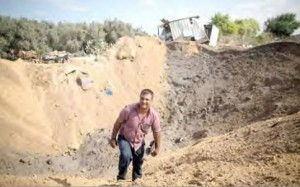 During the past week, Israeli warplanes conducted 60 airstrikes on many areas in the Gaza Strip. In addition, a Palestinian civilian was killed on “Yitzhar” settlement bypass road, south of Nablus.

During the past week, Israeli forces conducted 69 incursions into Palestinian communities in the West Bank.

On 24 August 2016, Israeli forces directly opened fire at a Palestinian civilian car on “Yitzhar” settlement bypass road, south of Nablus. As a result, the driver was hit with several bullets and immediately died. It was later found out that the person killed was Sary Abu Ghurab (26) from Qabatia village, southeast of Jenin. Israeli forces claimed that the Palestinian civilian stepped out of the car and stabbed an Israeli soldier in his neck.

On 19 August 2016, a Palestinian civilian was wounded with a Two-two bullet to his foot and then abducted by Israeli forces along with 4 other civilians. This happened when Israeli Special Forces moved into al-Jabal Intersection in the village and raided some shops. A number of young men gathered and threw stones and Molotov cocktails at the soldiers.

On 21 August 2016, Israeli forces moved into al-Far’ah refugee camp, south of Tubas. A number of Apelstinian youngsters then gathered to throw stones and empty bottles at the soldiers, who in response fired live and metal bullets. As a result, a Palestinian civilian was hit with a bullet to the right arm and wounded with shrapnel to the chest. The wounded civilian was taken to Tubas Turkish Hospital and then transferred to Annajah Educational Hospital in Nablus.

On 23 August 2016, 6 civilians were wounded. One of them was wounded with a bullet to the leg while the five others were wounded with metal bullets. This happened when Israeli forces moved into Beit Jala, Beit Sahour and their camps.

Israeli warplanes conducted 60 airstrikes on many areas in the Gaza Strip. A water reservoir tank and 5 military training sites were targeted, and 3 Members of al-Qassam Brigades sustained minor wounds.

In the Gaza Strip, in the context of using excessive force against peaceful protests, four civilians, including a child, was hit with several bullets. 3 of them were wounded in the eastern side of al-Shuja’iyah, east of Gaza City while the child was wounded in the eastern side of al-Bureij in the central Gaza Strip. This happened when dozens of children and youngsters headed to the border fence between the Gaza Strip and Israel in the aforementioned areas.

On 24 August 2016, a shepherd was wounded when Israeli soldiers stationed inside the watchtowers, north of Beit Hanoun in the northern Gaza Strip opened fire at sheperds, who were 200 meters away from the border fence.

In the context of airstrikes, on 21 August 2016, an Israeli drone launched two missiles at a water reservoir tank on al-Masriyeen Street, east of Beit Hanoun in the northern Gaza Strip. No casualties were reported.

At approximately 21:40 on the same day, the Israeli warplanes conducted 60 airstrikes in many areas in the northern Gaza Strip. The airstrikes continued until 23:30 and targeted vacant lands along the border fence between the Gaza Strip and Israel. Those areas were only 300-500 meters away from the border fence along the eastern and northern borders of Beit Hanoun and northern borders of Beit Lahia and Um al-Nasser village. The airstrikes targeted also 5 military training sites belonging to the armed Palestinian groups. As a result, dozens of nearby houses’ windows shattered and four civilians, including a child, were wounded. One of them sustained shrapnel wounds while others suffered trauma.

In the context of targeting border areas, on 21 August 2016, Israeli forces fired artillery shells at Palestine Training site belonging to al-Qassam Brigades, northeast of Um al-Nasser village in the northern Gaza Strip. As a result, the site sustained damages and 3 Members of al-Qassam sustained minor wounds.

In the context of targeting Palestinian fishermen in the sea, on 18 August 2016, Israeli gunboats stationed off al-Balakhiyah shore, northwest of al-Shat’i refugee camp, northwest of Gaza City, sporadically opened fire twice at the Palestinian fishing boats sailing within 6 nautical miles. At approximately 07:00 on Friday, 19 August 2016, the shooting recurred in the same area. As a result, fishermen were terrified and fled away in addition to losing and cutting dozen pieces of fishing net.

On 21 August 2016, Israeli gunboats stationed off al-Wahah shore, northwest of Beit Lahia in the northern Gaza Strip, twice opened fire. During the second shooting, Israeli forces abducted two fishermen and took them along with their boat to Ashdod Seaport in Israel. They were released on the next day while their boat was kept in custody. At approximately 07:00 on Tuesday, 23 August 2016, the shooting recurred in the same area.

At approximately 07:00 on Wednesday, 24 August 2016, Israeli gunboats stationed off al-Sudaniyah , west of Jabalia in the northern Gaza Strip, opened fire at the Palestinian fishing boats sailing within 5 nautical miles.

Israeli settlement activities continued this week in the West Bank.

On 24 August 2016, Israeli forces demolished two dwellings and a youth centre in Kherbet Um al-Kheir, southeast of Yata, south of Hebron. The first 30-square-meter dwelling belongs to Zayed soliman ‘Eid al-Hathalin and was built on 10 August 2016 after his dwelling that was donated by the EU was demolished. The second 60-square-meter dwelling belongs to Khadrah Dawoud al-Hathalin (60) while the Youth Centre was built on an area of 30 square meters.

In the context of settlers’ attacks against Palestinian civilians in occupied Jerusalem, on 23 August 2016, an Israeli settler severely beat Murad Ghassan al-Rajabi (20) when he was in al-Sharaf neighbourhood in occupied East Jerusalem’s Old City, causing fractures in his nose, wounds in his face and bruises in the neck.

During the past week, Israeli forces attacked non-violent demonstrations against the Annexation Wall and Israeli settlements.

Following the Friday prayer, on 19 August 2016, dozens of Palestinians and Israeli and international human rights defenders organized protests against the annexation wall and settlement activities in Bil’in and Ni’lin villages, west of Ramallah, al-Nabi Saleh village, northwest of the city, and Kufor Qaddoum village, northeast of Qalqiliya. Israeli forces fired live bullets, rubber-coated metal bullets, sound bombs and tear gas canisters to disperse the protesters and chased them into the agricultural fields and between houses. As a result, many civilians suffered tear gas inhalation while others sustained bruises as Israeli soldiers beat them up.

At approximately 13:30, on Friday, 19 August 2016, dozens of Palestinian young men headed to the border fence between the Gaza Strip and Israel, east of al-Shuja’iya neighbourhood. A number of protesters approached the fence, set fire to tires and threw stones at Israeli soldiers. After that, the Israeli soldiers sporadically fired live bullets and tear gas canisters at the protesters. As a result, 3 civilians were hit with live bullets and were then taken by a PRCS ambulance to al-Shifa Hospital in Gaza City, where medical sources classified their wounds as moderate.

Due to the number and severity of Israeli human rights violations this week, the PCHR made several recommendations to the international community. Among these were a recommendation that the High Contracting Parties to the Geneva Conventions fulfil their obligation to ensure the application of the Conventions, including extending the scope of their jurisdiction in order to prosecute suspected war criminals, regardless of the nationality of the perpetrator and the place of a crime, to pave the way for prosecuting suspected Israeli war criminals and end the longstanding impunity they have enjoyed.