Cyclists and supporters of Palestinian human rights took to the streets in 20 citiesacross the world on Saturday, March 10, 2018 for the #RelocateTheRace International Day of Action.

Bike rallies and actions called on Union Cycliste Internationale (UCI), the governing body of cycling to relocate the start of the famed Giro d’Italia cycling event, set for May 4 in Jerusalem. Participants highlighted Israel’s denial of Palestinian rights, including freedom of movement, and its use of the race to sport-wash its regime of occupation and apartheid.

The day of action started in Palestine, with dozens of young Palestinian men and women participating in a “Counter Giro” race in the occupied West Bank from Ramallah to Qalandia, a locality confined by Israel’s apartheid wall and military checkpoints. The race was part of the events for Israeli Apartheid Week and highlighted Israel’s ongoing destruction of Palestinian homes and farms. 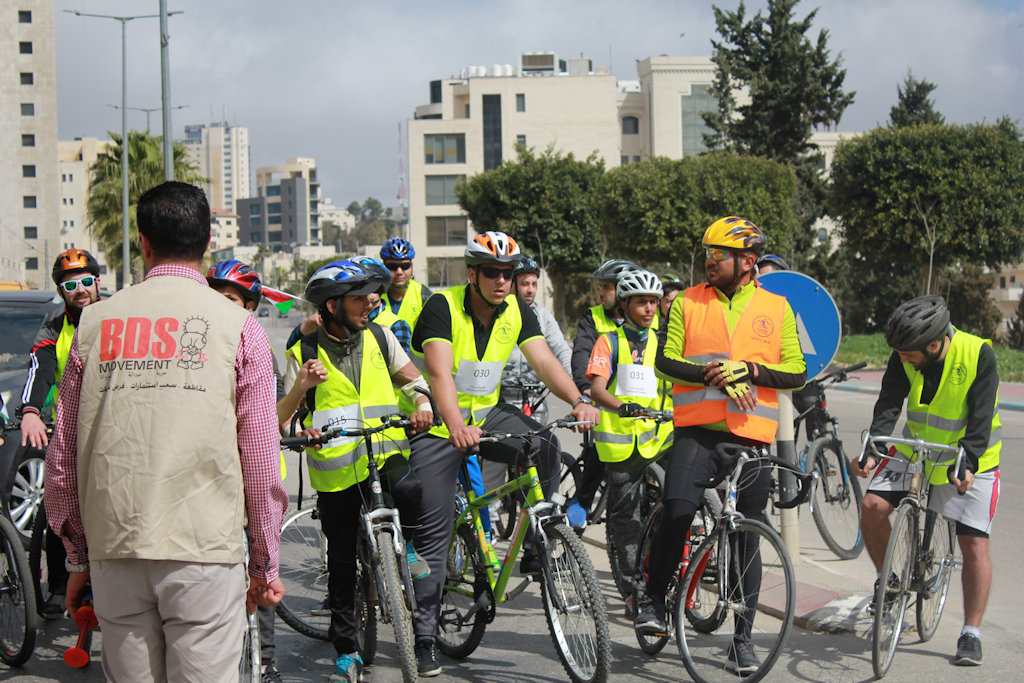 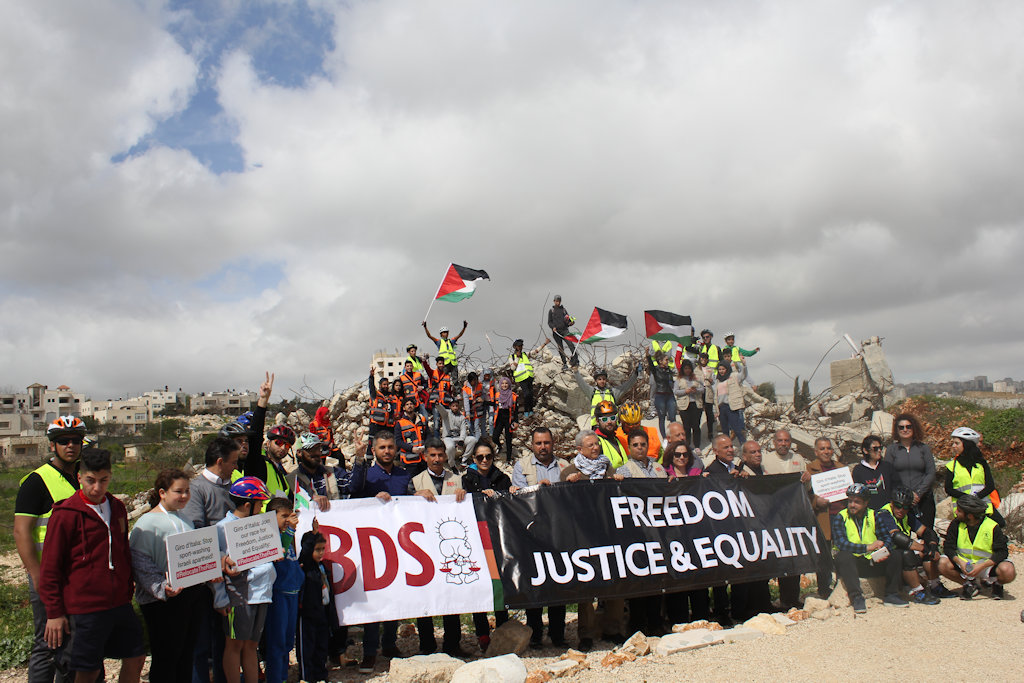 Qalandia, remains of a Palestinian home demolished by Israel. In 2016, Israel demolished 33 homes in this village alone.

In Switzerland, cyclists pedaled to UCI headquarters in Aigle. Despite numerous letters and appeals to move the race start, citing UCI’s own ethics code, the organization has failed to take action to prevent professional cycling from being complicit in Israel’s violations of international law.

In Kuala Lumpur, more than 50 people, young and old, individuals and families, students and cyclists, gathered on Saturday morning to call on the Malaysian Cycling Federation, a UCI board member, to take steps to ensure UCI relocates the race. 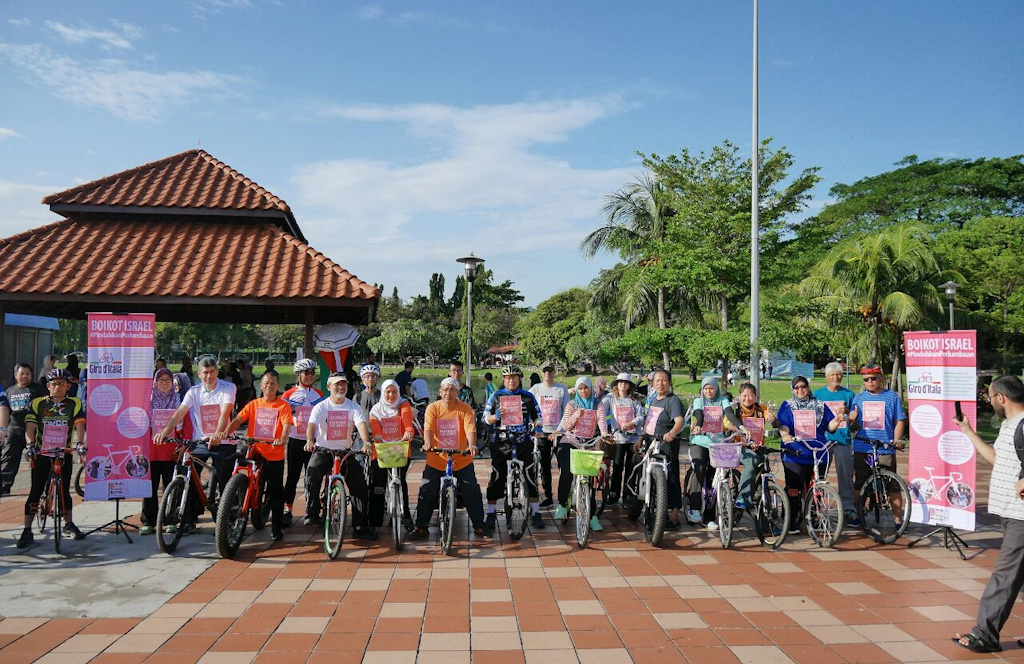 Protests were held in more than 10 cities across Italy. In Rome, dozens of cyclists gathered for a parody award ceremony near the Colosseum, where the Giro d’Italia finish line will be. Italian electric utility ENEL was “honored” as Best Sponsor of Israeli Apartheid. UCI was given the Ostrich Award for keeping its head in the sand. Giro organizers, who received a reported 10 million euro from Israel, were honored as Best Profiteers From Human Rights Violations. The Israeli cycling team was honored for Best Cycling Cover-up of Israeli Crimes. 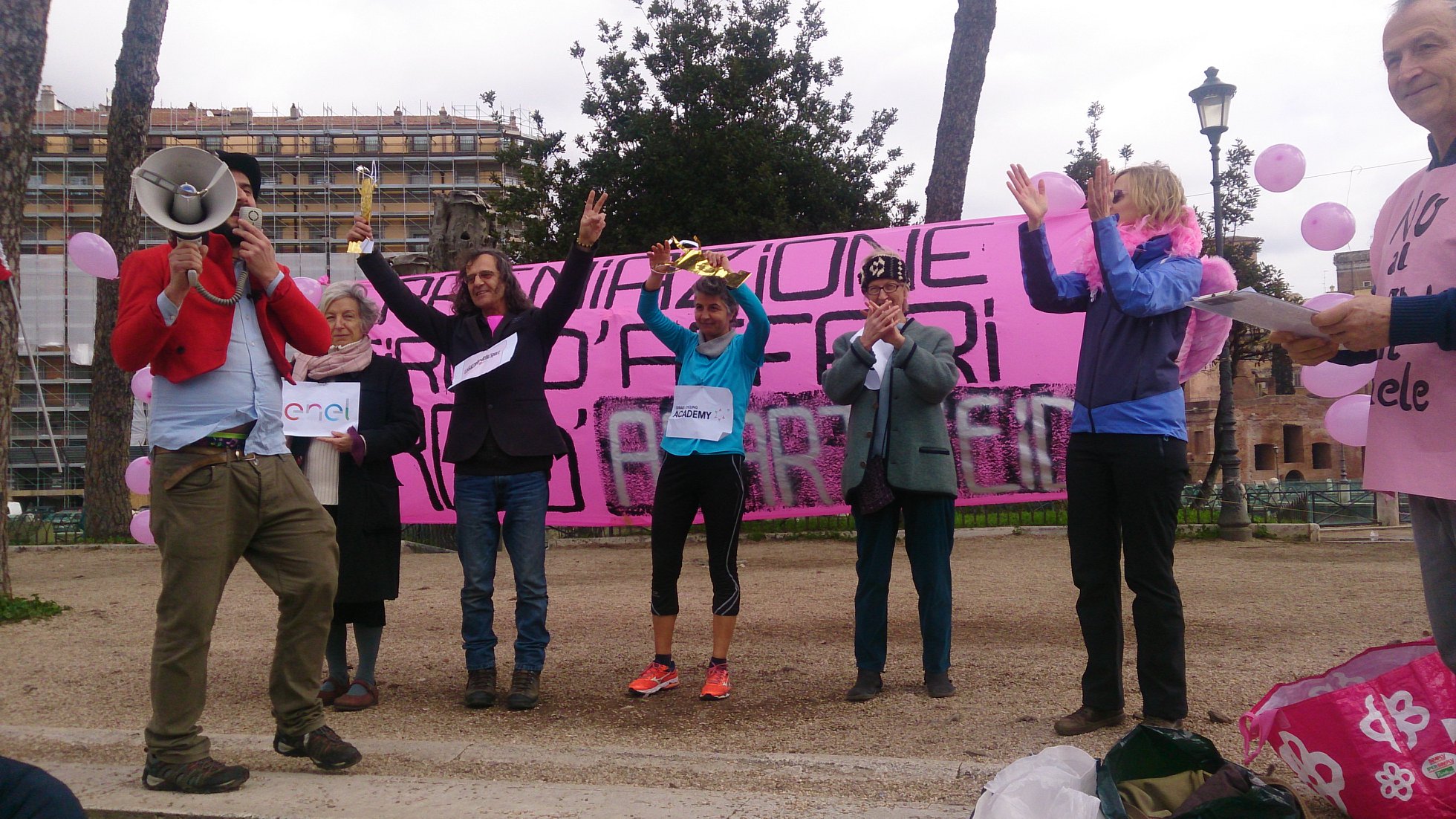 In Sicily, activists held a public assembly in Catania to prepare for protests at the Giro d’Italia. The first Italian stages of the race will be on the island. Bike rallies were also held in Bologna, Milan, Naples, Ravenna, Torino, Udine, Vicenza and Venice. 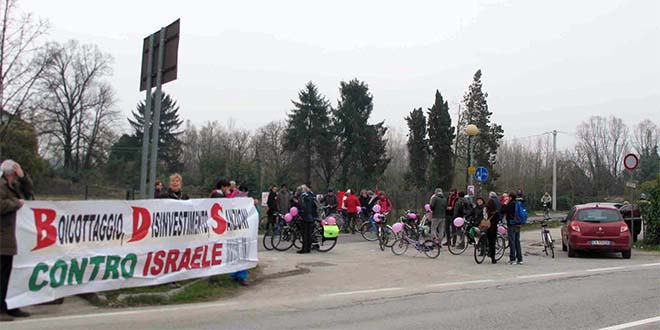 In the Netherlands, roughly 80 cyclists participated in an “Alternative Giro” in The Hague, pedaling from Parliament past the Peace Palace and the International Criminal Court, noting Israel’s long record of war crimes and human rights violations. 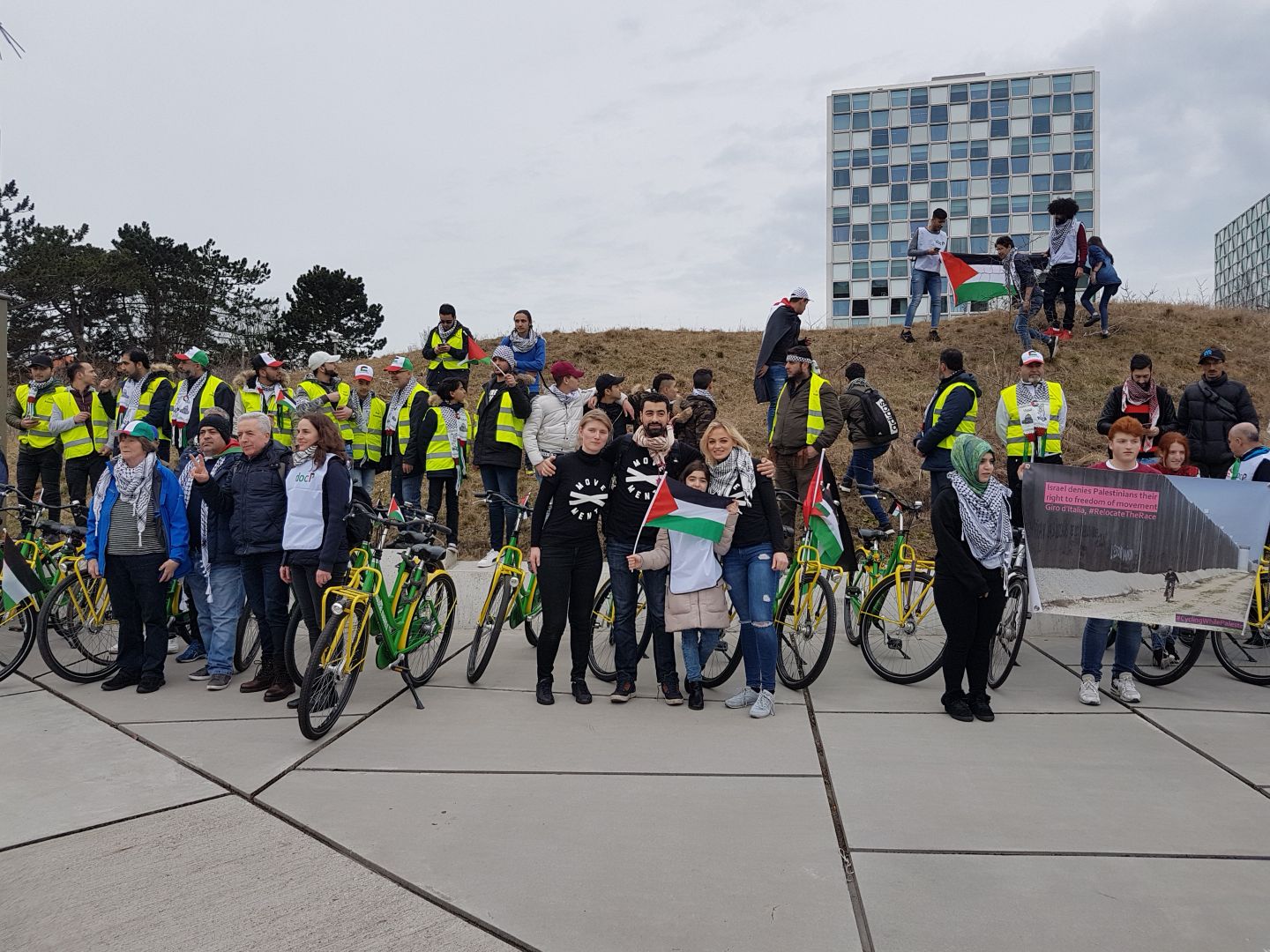 In Manchester, cyclists from The Big Ride for Palestine pedalled to the British Cycling Federation Headquarters and the Italian Consulate, chanting “Save face! Relocate the race!” 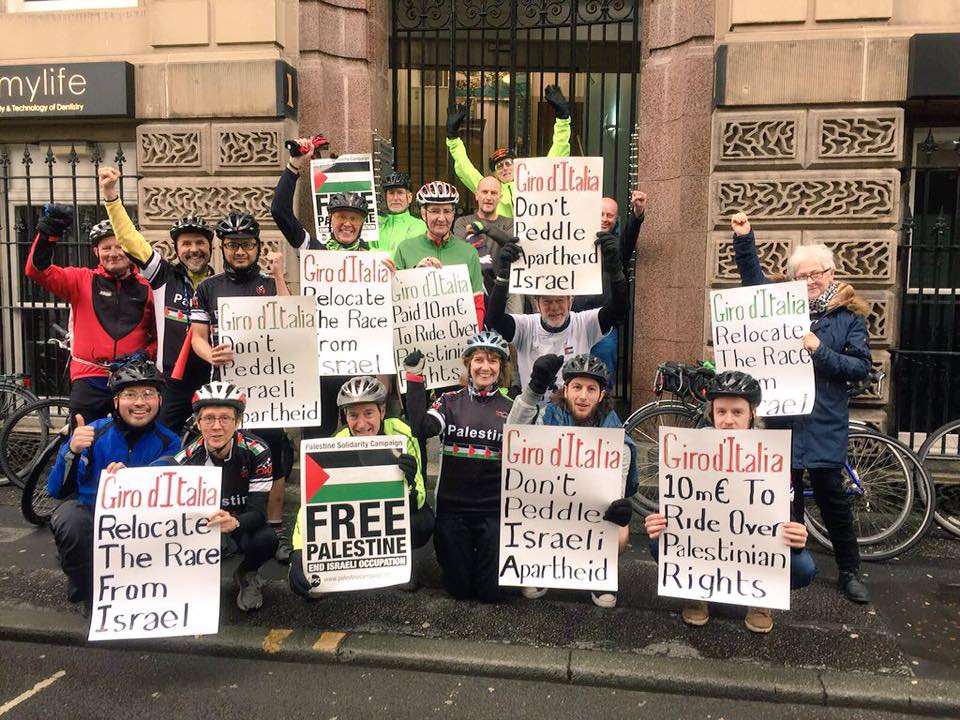 In France, cyclists in Paris rode from the Tour Eiffel to French Giro broadcaster L’Equipe. Bike rallies were also held in Saint-Étienne and in Marseilles, where activists distributed over 1500 leaflets. 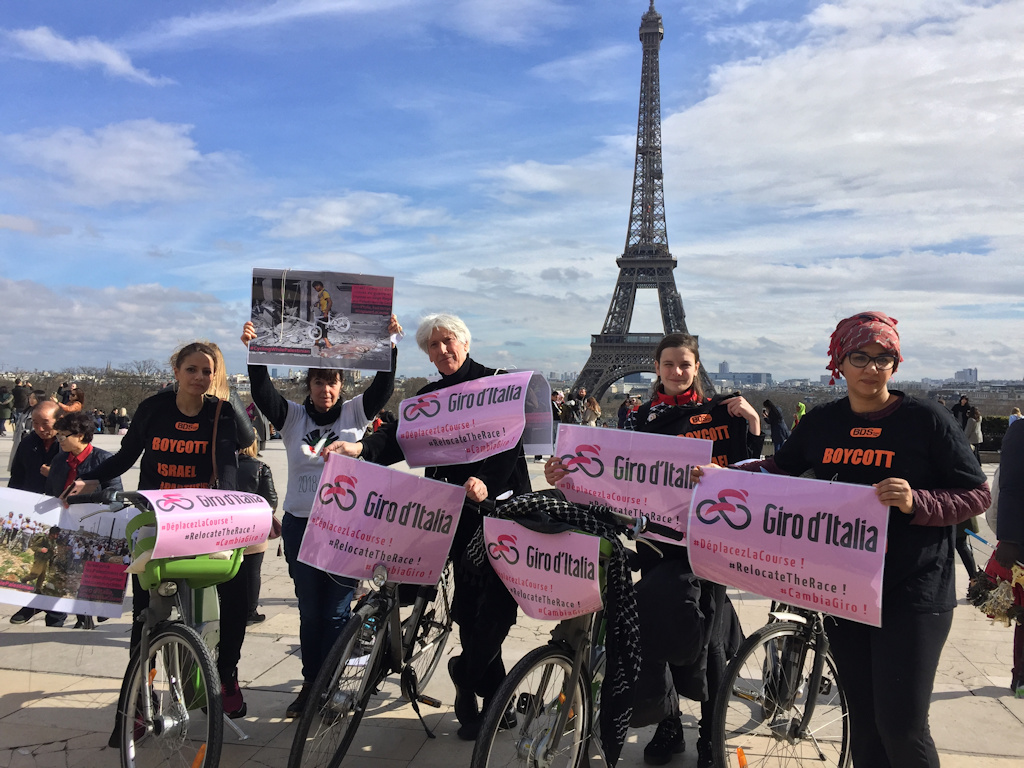 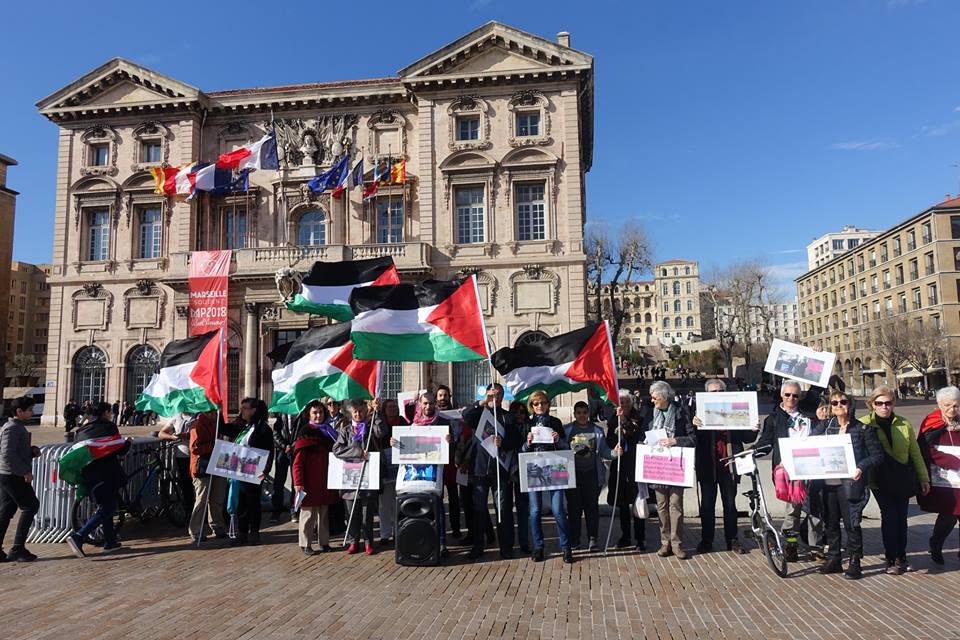 In Belgium, activists in Leuven distributed bike flags reading “Ride for peace and freedom, not for Israeli apartheid” to an incredibly responsive public, who objected to the abuse of cycling to hide Israel’s human rights abuses. 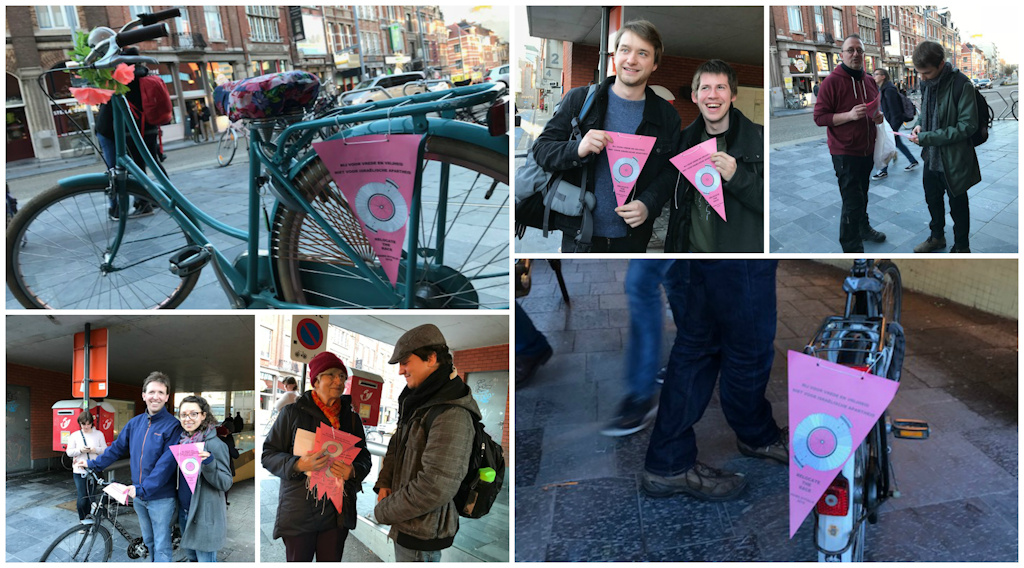 Supporters of Palestinian rights around the world are committed to continue pressuring professional cycling until it ends its partnership with the Israeli government, allowing one of cycling’s top races to be exploited for political means.