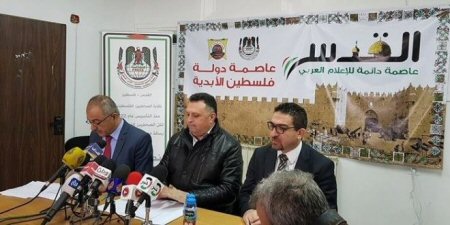 The Palestinian Journalists Syndicate has announced the summary of its annual report for freedoms in 2017, in a special press conference held on Wednesday.

According to the PNN, PJS president Nasser Abu Baker focused in his opening speech on the dramatic increase in the number and nature of these violations, he also mentioned that the FAJ will gather today, in Cairo, to discuss the Palestinian situation.

“With this sharp escalation in the Israeli violations against our journalists, it is shameful to see increase in violations by local authorities” Abu Baker said.

For his part, the president of the Independent Commission of Human Rights (ICHR), Ammar Dowik, praised the role of journalists, mainly in in field, as they face a high risk of Israeli violations. He also commended the partnership between ICHR and PJS in following up on the violations.

Deputy minister of the Ministry of Media Mahmoud Khalifah said that the Israeli violations against the Palestinian journalists targets their narrative and aims to prevent the truth.

The Head of freedoms committee in PJS, Mohammed Allaham, introduced the main indicators and numbers in the report. The report said that the second half of last year witnessed higher percentage of violations, and the highest months were December followed by July.

Allaham said that the nature of violations in 2017 was different. “October witnessed Israeli closure for 8 offices of 3 media production companies by military orders, with raiding and closing 2 radio stations, two journalists were sentenced by 2 years because of their professional activities as journalists, financial penalty targeted 25 journalist and 28 journalists still in Israeli jails”.