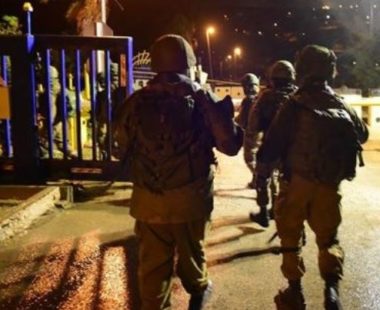 Israeli soldiers abducted, on Thursday at dawn, nine Palestinians in several parts of the occupied West Bank, including Jerusalem, after the army invaded and violently searched many homes, the Palestinian Prisoners’ Society (PPS) has reported.

In occupied Jerusalem, the soldiers abducted a teenage boy, identified as Mos’ab Abu Ghazala, only two days after releasing him, in addition to another teen, Mustafa Karama, from the al-Ram town, and Mohammad Najib, from the Old City.

In Ramallah, in central West Bank, the soldiers abducted Ahmad Safwan Abu Fares, from his home.

Another Palestinian, identified as Ahmad Abu Hallouq, was abducted from his home in Jenin, in northern West Bank.

In the Gaza Strip, the Israeli Air Force carried out several airstrikes targeting a number of areas, including near the Shati’ refugee camp, in northern Gaza, and near Rafah, in the southern part of the coastal region

Israel also decided to unilaterally decrease the fishing zone for the Palestinians in Gaza from 15 nautical miles to ten.