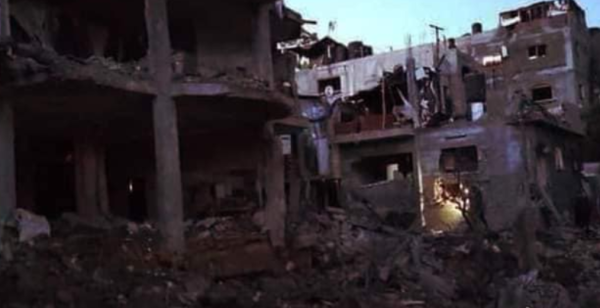 The Deputy Minister of Housing and Public Works in Gaza Naji Sarhan has reported, Thursday, that Israeli missiles and shells have damaged 16800 residential units and buildings, including the destruction of 1000, and damaging 1800 units that could collapse at any moment.

Update: The Palestinian Ministry of National Economy has confirmed that Israeli missiles struck two factories in the Industrial Zone in Gaza City.

It said the army fired missiles into the Foam Line factory for Cork Plates manufacturing and Al-Sawafiri factory for home furniture.

The Ministry added that the number of factories that were destroyed or severely damaged in Gaza has increased to at least twelve.

Deputy Housing Minister in Gaza Naji Sarhan stated that, among the 16800 units, the Israeli missiles destroyed 1000 units and rendered 1800 unsafe, likely to collapse,

Sarhan added that the Ministry is trying to collect all needed information, including obtaining data from the scenes of destruction, such as the number of Palestinians affected by the Israeli attacks, and added that, once this onslaught on Gaza is over, the Ministry will survey all buildings and reevaluate their statuses after a thorough examination.

He also said that, so far, the damages caused to the homes and buildings exceeded $350 million, including $150 million from previous Israeli offensives. As for the constant efforts to find Palestinians buried under the rubble of bombarded homes, buildings, residential towers, and office buildings despite the ongoing Israeli strikes, the Deputy Minister stated that Civil Defense and Rescue Teams, as well as the locals, managed to locate the corpses of 30 Palestinians, and saved 28 others.

In his report, the Deputy Minister said: