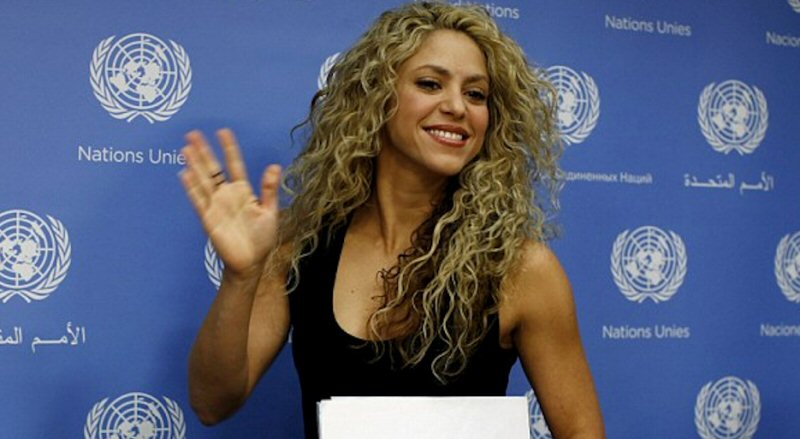 May 30, 2018 / By Palestinian Campaign for the Academic and Cultural Boycott of Israel (PACBI) /

Entering damage control mode after Shakira nixed her July 9 Tel Aviv gig, Israel’s spin machine claimed the gig was never scheduled to begin with. Then, they said it wasn’t cancelled, it was just postponed.

We aren’t sure how a gig that was never scheduled was suddenly postponed.

The following timeline details what culminated in Shakira dropping her July gig in Tel Aviv. Fans and activists from Lebanon, Palestine, the US, Colombia and beyond participated in this weeks-long effort.

April: The Israeli daily Israel Hayom reports Shakira is “close to signing” a deal to perform in Tel Aviv in July.

Early May: Israeli Channel 2 TV in an “exclusive” report breaks the news that Shakira had finally closed the deal to appear in Tel Aviv on 9 July. 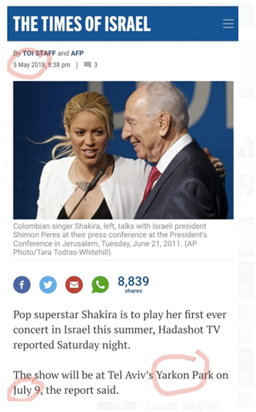 May 5: Israeli ticket sales agency Ticketsi confirms that Shakira will perform at Yarkon Park in Tel Aviv on July 9 and that tickets would be available “soon.” Reassuring fans, it adds: “The contacts between the Israeli producers and the singer were held for several months, and now the contract is finally signed and the singer is on her way to Israel.”

May 6-7: The Israeli embassy in Mexico and the Israeli government-linked organization Stand With Us in the US tweet news of the concert.

Shakira is coming to Israel! https://www.timesofisrael.com/shakira-to-play-her-first-israel-gig-in-tel-aviv-in-july/ …

Colombian pop star, who has Lebanese grandparents, has visited in the past but never played here

.@Shakira to play her first Israel gig in Tel Aviv in July. Colombian star, who has Lebanese grandparents, has visited in the past but never played here – she’ll receive a huge welcome! https://www.timesofisrael.com/shakira-to-play-her-first-israel-gig-in-tel-aviv-in-july/ …

Colombian pop star, who has Lebanese grandparents, has visited in the past but never played here

Soon after this official Israeli confirmation of the Shakira show in Tel Aviv, the Israeli government-linked app Act.IL sends Israelis and their allies abroad text messages urging them to counter BDS pressure to cancel Shakira’s concert in Tel Aviv. The text of the message read (screenshots below):

The international pop star, Shakira, is said to perform Tel Aviv for her first time! The BDS Movement is trying to get her to cancel her show in Israel but politics and entertainment should not mix. TWEET at Shakira and let her know how excited you are for her to perform in Israel this summer!

Suggested Comment #1: We’re so excited for your performance in Israel! All your fans – Jews, Muslims and Christians, alike can’t wait to dance. 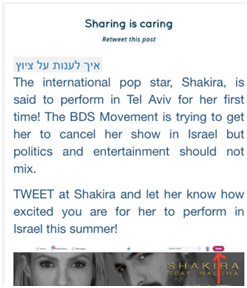 May 11: The Lebanese Campaign for Boycotting Israel’s Supporters launches a global campaign to convince Shakira to cancel her Tel Aviv show.

May 22: Jewish Voice for Peace (US) appeals to Shakira.

May 23: The Great Return March Steering Committee and several organizations in Gaza send an appeal to Shakira.

May 24: Hundreds of Palestinian municipalities and cultural organizations send an open letter to Shakira urging her not to art-wash Israel’s May 14 massacre in Gaza.

May 24: The Forward (US) asserts that Shakira “takes a stand on Israel by performing in Tel Aviv,” confirming the July date for the show. The article ends with:

This summer, we’ll be following the inevitable BDS pushback against Shakira’s planned performance, though we have full faith that Shakira stands by her support for Israel — Shakira doesn’t lie, and neither do her hips.

May 27: A Lebanese-led Twitter storm to convince Shakira to cancel her Tel Aviv show reaches more than 2 million people.

May 28: Live Nation, a multinational concert promoter, claims in a tweet that Shakira never planned to play Tel Aviv this summer. The Israeli media widely repeats this assertion.

The media has incorrectly reported that Shakira will be performing in Tel Aviv this summer. While no dates this summer will work, Shakira and Live Nation hope to bring a show to her fans in Israel in the future.

May 29: PACBI welcomes the news that Shakira will not be performing in Tel Aviv

We welcome news that Shakira will not be performing in Tel Aviv, dashing Israel’s hopes to use her name to art-wash its latest massacre in Gaza. Artists, especially UN Goodwill Ambassadors, have a moral duty not to be complicit in covering up human rights violations & apartheid.

May 29: A representative of Arbel, the production company that was organizing Shakira’s concert in Tel Aviv, tells the Spanish news agency EFE: “The date of Shakira’s arrival in Israel has been postponed.” [Emphasis added]

May 29: After news of the nixing of Shakira’s Tel Aviv concert became public, the Israeli ticket sales agency Ticketsi updates its web page: “Shakira’s performance in Israel was postponed and will not be held on schedule. The production company states that this is only a postponement and the performance will take place in Israel later on.” [Emphasis added]

05/22/18 Occupation Captured: Photos of Palestinian Life and Israeli Occupation in the West Bank City of Hebron