Soldiers Abduct A Shepherd In Hebron 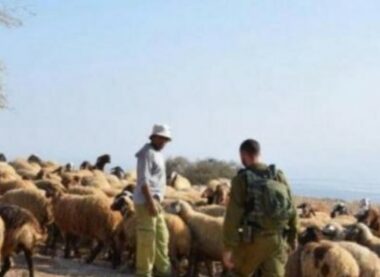 Israeli soldiers abducted, Monday, a Palestinian shepherd in the Tiwana village, in Masafer Yatta, south of Hebron, in the southern part of the occupied West Bank.

Fuad al-Amour, the coordinator of the Protection and Steadfastness Committee in southern Hebron, said the soldiers abducted a shepherd while herding his sheep in Sadat ath-Tha’lab area, near the illegal Karmiel and Ma’on colonies, which were built on stolen Palestinian lands.

He added that the soldiers cuffed and blindfolded the shepherd, before moving him to an unknown destination.

It is worth mentioning that the Palestinian shepherds and farmers in the area face dire conditions, due to ongoing assaults and violations carried out by the colonists and the soldiers.

The attacks target the residents, their homes, lands, and even their livestock, amidst ongoing attempts to force them to leave their ancestral lands.

Al-Amour called on various legal and human rights groups to intervene and end the escalating Israeli violations against the Palestinian people and to stop the ongoing theft of Palestinian lands for the benefit of the illegal colonies, built on Palestinian lands in direct violation of International Law, the Fourth Geneva Convention, in addition to various United Nations and Security Council resolutions.