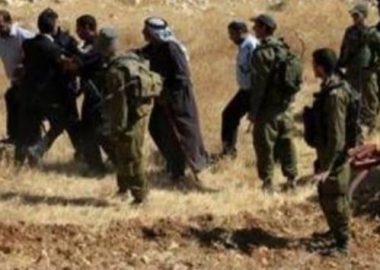 Israeli soldiers abducted, Tuesday, four Palestinian farmers, and illegally confiscate a car that was transporting them, in the ar-Ras al-Ahmar area, south of Tubas, in northeastern West Bank.

The soldiers stopped a car transporting farmers to their lands, south of Tubas, abducted four of them, and illegally confiscated the car.

In addition, the soldiers chased many farmers in the area, forcing them out of their lands, and tried to abduct some of them.

On Tuesday at dawn, the soldiers invaded many homes in the occupied West Bank, violently searched them, and abducted eighteen Palestinians.

Also on Tuesday, Israeli navy ships attacked many fishing boats, in Palestinian territorial waters in the besieged Gaza Strip, and capsized one of them after firing shells and live rounds at it.