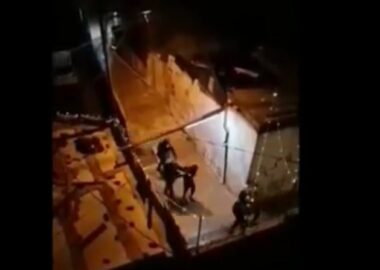 Israeli soldiers abducted, Saturday, three Palestinians in the al-‘Isawiya town, in the occupied Palestinian capital, Jerusalem, and confiscated a car in Beit Sahour, east of Bethlehem, in the West Bank.

Media sources in Jerusalem said the soldiers closed and isolated al-‘Isawiya before invading it.

They added that the soldiers stormed and ransacked several homes in the center of the town, before abducting Hasan Yasser Darwish, Ahmad Issam Darwish, and his brother, Majed.

The invasion led to protests between many youngsters, who hurled stones at the army vehicles, and the soldiers who fired gas bombs, concussion grenades, and rubber-coated steel bullets.

Also, the soldiers invaded Beit Sahour city, east of Bethlehem, before storming and searching the home of Husam Abu Dayya, and confiscated his car.