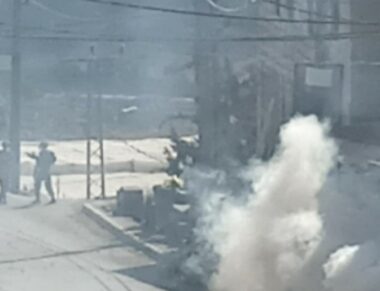 Israeli soldiers attacked, on Sunday evening, dozens of nonviolent Palestinian protesters in the al-Jalazoun refugee camp, north of the central West Bank city of Ramallah, while marching against the seriously escalating violations by the illegal Israeli colonialist settlers against the Palestinians and their property.

Media sources said dozens of Palestinians marched towards the main entrance of the refugee camp while chanting against the constant Israeli violations, especially the recent serious assaults and escalation by the illegal colonialist settlers across the occupied West Bank.

Mohammad Mobarak, the head of the Popular Committee in al-Jalazoun, said the procession came in solidarity with the various villages and towns, subject to the escalating Israeli violations.

He added that, while the illegal colonizers are attacking dozens of homes and residents across the occupied West Bank, Israeli soldiers have also escalated their attacks against the residents who were just trying to protest their homes and property.