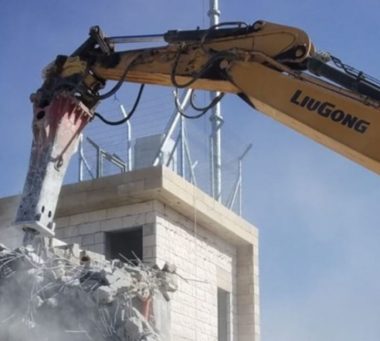 Media sources said the home, which was still-under-construction, was demolished because the so-called “Civil Administration Office,” the executive branch of the illegal Israeli occupation of Palestine, did not recognize the construction permit which was issued by the town council and the Palestinian Authority.

They added that the family pleaded with the Civil Administration Office to refrain from demolishing their property, but it went ahead with its orders, under the pretext that the property was built on Area C of the occupied West Bank, under full Israeli control.

Hazem Yassin, the head of ‘Aseera ash-Shamaliya Village Council, said the demolished property is owned by Moammar Hamadna, and was legally built on his own private land, in the as-Sareeh area, southwest of the village.

On Thursday at dawn, the soldiers demolished four homes in Beit Kahil town, northwest of the southern West Bank city of Hebron.