Soldiers Injure A Palestinian, Abduct Another Near Ramallah, And One In Hebron 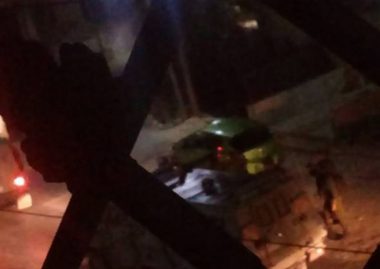 Media sources in Ramallah said several army jeeps invaded Beit Rima town at dawn, and clashed with many youngsters, who hurled stones at the military vehicles.

The sources added that the soldiers shot a young man with a live round in one of his knees, before local medics rushed him to a hospital in Ramallah.

The soldiers also abducted another man, identified as William Rimawi, 30, after invading his home and violently searching it, causing damage.

On Sunday at night, undercover Israeli soldiers infiltrated into Yatta town, south of Hebron, abducted a young man, identified as Sami Hafeth al-Hreini, 22, and took him to an unknown destination.

|P.A. Forces Detain Hebron Radio Director Days After Israel Stormed The Station And Shut It Down|