Israeli Soldiers Abduct Two Palestinians In Bethlehem, One In Jenin 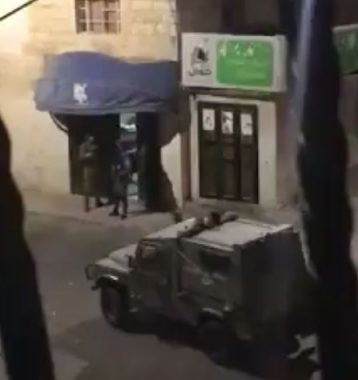 Israeli soldiers abducted, on Monday at dawn, two young Palestinian men in the West Bank governorate of Bethlehem, and one in Qabatia town, south of the northern West Bank city of Jenin, the Palestinian Prisoners’ Society (PPS) has reported.

The Bethlehem office of the PPS said the soldiers invaded Wad Ma’ali area, in the center of the city, searched homes and abducted Ayatollah Mohammad Shehada, 21, whose father was assassinated by the army in 2008.

In addition, the soldiers invaded and ransacked homes in Qabatia town, south of Jenin, and abducted Mohammad Omar Jawabra, 21.

The soldiers also installed many roadblocks, especially around the nearby towns of ‘Arraba and Ya’bad, in addition to Jenin-Nablus Road, before stopping and searching dozens of cars, and inspected the ID cards of many Palestinians.

Also at dawn, the army invaded Beit Rima town, northwest of the central West Bank city of Ramallah, wounded one Palestinian with live fire, and abducted another, identified as William Rimawi, 30, after invading his home and violently searching it, causing damage.

On Sunday at night, undercover Israeli soldiers infiltrated into Yatta town, south of Hebron, abducted a young man, identified as Sami Hafeth al-Hreini, 22, and took him to an unknown destination.

On Sunday at night, the soldiers abducted two young Palestinian  men, identified as Saleh Ahmad ‘Amour, 30, and Tareq Bassam ‘Amour, 25, from Rommana town, west of Jenin, after stopping him at a sudden military roadblock installed on the main entrance of the town.

|P.A. Forces Detain Hebron Radio Director Days After Israel Stormed The Station And Shut It Down|