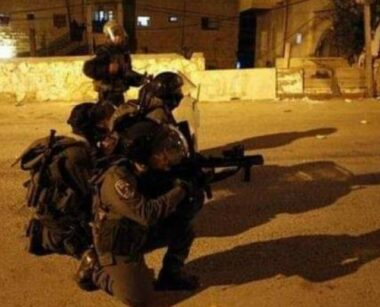 Israeli soldiers shot, on Monday evening, a young Palestinian man during a protest near Dotan military roadblock, close to Ya’bad town, south of the northern West Bank city of Jenin.

Media sources said dozens of Palestinians marched in solidarity with the detainees, held by Israel, chanted for their release, and the establishment of an independent, sovereign Palestinian state.

One Palestinian was mildly injured after the soldiers shot him with a rubber-coated steel bullet in the leg.

Moreover, the soldiers abducted a young man near the Salem military base, west of Jenin.

Furthermore, the soldiers injured 30 Palestinians, including ten who were shot with rubber-coated steel bullets, during a procession in solidarity with the Palestinian detainees, near the Huwwara military roadblock, south of the northern West Bank city of Nablus.

The soldiers also assaulted and abducted, Monday, two young Palestinian men near Bab Hutta, one of the gates of the Al-Aqsa Mosque, in the occupied Palestinian capital, Jerusalem.