Soldiers Isolate Ras Karkar, Abduct A Palestinian And Injure Many 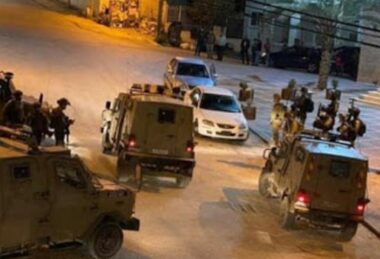 Israeli soldiers isolated, on Sunday evening, Ras Karkar village, west of the central West Bank city of Ramallah, abducted a young man and caused many to suffer the effects of teargas inhalation.

Radi Abu Fkheitha, the head of Ras Karkar Village Council, said the soldiers installed two military roadblocks at the village’s two main roads, before preventing the Palestinians from entering to leaving it.

He added that the soldiers stopped and searched dozens of cars, and interrogated the residents while inspecting their ID cards, before abducting one of them.

The soldiers also invaded the village, and fired many gas bombs and concussion grenades at local protesters, causing scores of Palestinians to suffer the effects of teargas inhalation.

Abu Fkheitha also said that the soldiers forced shop owners to close, and ordered the Palestinians to return to their homes.

It is worth mentioning that the soldiers have recently increased their restrictions on the Palestinians in the village, and have been installed sudden roadblocks in and around it.

The village has also been subject to escalating Israeli violations especially after Israel announced the annexation of the ar-Reesan Mountain, owned by the Palestinians, for its illegal colonialist activities.