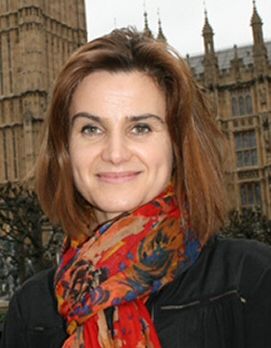 Christof Lehmann (nsnbc) : The fatal shooting and stabbing of British MP Joe Cox on Thursday, outside Birstall library in North Yorkshire, shocked members of all parties in the UK. Jo Cox was as good at stirring up controversy as she was at creating cross-party consensus.

Brexit beside, Jo Cox was a politician whose approach to foreign policy was complex, challenging, in some cases, courageous, and, in others, right out illegal. Jo Cox had the courage to criticize Israel for the abuse of Palestinian children. However, she would also call for illegal acts of war against Syria under humanitarian cover, while omitting Britain’s leading role in manufacturing the attempted overthrow of the Syrian government with the help of “rebels”.

The interpretation and political use of international law by the late MP and Chairwoman of Britain’s All-Party Parliamentary Group on Syria was arguably, based on utilitarianism rather than on a principled position based in law.

Jo Cox earned the respect and admiration of many Palestinians, pro-Palestinian advocates, advocates for international law, and many others when she courageously criticized Israel for its illegal abuse of Palestinian children. On her website Cox would among others write:

Israel is the only country in the world that systematically prosecutes children in military court and the differences between how Israeli children and Palestinian children are treated are stark. For example, an Israeli child subject to civil court proceedings has to have access to a lawyer within 48 hours. Yet a Palestinian child can be left without legal guidance for as long as 90 days. This, and many other disparities, underline the existence of a two tier justice system operating in the West Bank. One where Israeli children are subject to the rule of law; Palestinian children are not. This disparity of treatment, along with the estimate that 59,000 Palestinian children detained by the Israeli military since 1967 are likely to have been physically abused in one way or another, is deeply disturbing. It is also a clear and fundamental abuse of basic human rights and international law, including the UN Convention on the Rights of the Child.

Referring to data released  by the Israeli Prison Service, Jo Cox would note that half of  the detained Palestinian children from the West Bank are transferred to prisons inside Israel. Cox stressed that the transfer of persons en masse from an occupied territory was a serious issue and in fact a war crime. Cox wrote:

This is a breach of the Geneva Convention. The added human impact is that these unlawful transfers mean families struggle to visit their children often over many months. Estimates put the number of Palestinians detained since 1967 at 850,0000. Of these almost 100,000 are children. Between 500 and 700 children are prosecuted each year, with stone throwing the most common charge. This often brings with it a sentence of between 10 and 20 years.

Only rarely are British MPs so outspoken, with regard to Israel’s illegal occupation of Palestine, and illegal acts committed by Israel as an occupying power. Most MPs are only too aware of the reach of the Zionist lobby within the UK, internationally, and, not least, within major media conglomerates. The more surprising was Jo Cox’s absolute reversal with regard to international law concerning Syria.

MP Jo Cox was the Chairwoman of Britain’s All-Party Parliamentary Group on Syria. During her last speech in Parliament Cox would call for illegal acts of war against Syria under humanitarian cover. Cox would note that “desperate doctors in Aleppo” appealed for international help to prevent further massacres on civilians, and fearing a repeat of the horrors of Srebrenica.

It must be noted that the calls from the doctors, who claimed that hospitals had been bombed by the Syrian air force had been relayed through Doctors Without Borders (MSF).

MSF informed nsnbc that MSF did not have staff at the hospital in question and it was merely MSF supported. In August 2013 MSF also “relayed” claims from an MSF supported hospital. Namely, that the Syrian Arab Army had used chemical weapons against the people in Eastern Ghouta.

This claim has been proven wrong, and MSF had later, and more silently, to admit that it had no staff in Eastern Ghouta and merely relied on information (hearsay) from staff at the hospital that was located in an area that was held by the very “rebels” Liwa-al-Islam, who were responsible for the attack.

The reference to Srebrenica was in and on itself is also problematic. Not the least because Cox omitted the role that NATO members UK, France, Germany and others played in preparing the war against Yugoslavia during secret meetings in Germany since the mid-1970s. (See video-recorded testimony of French retired Brigadier-General Pierre Marie Gallois below).

Back to Syria – Cox would claim that it were the Syrian authorities who were primarily responsible for the horrific civilian casualties. Cox would claim that the government of the Syrian Arab Republic had a“long-standing policy of targeting civilians in opposition-held areas”. No evidence to substantiate the allegation was presented other than social media links. Cox would not present any evidence that would stand up to scrutiny at an international court to support her claim. It is even doubtful whether a court would be authorized by law to accept these links as evidence. Cox continued:

“We urgently now need a mechanism with clear consequences to deter further barbaric attacks on civilians. I have raised repeatedly, in this place, the need for a no bombing zone. Will the Secretary look at this now? …. And does the minister have evidence that Russian forces have been directly involved in the latest airstrikes; and if they were, does he not agree that it is surely time to look at fresh sanctions against Russia?”

There are several issues with Cox’s last speech that reveal a stunning utilitarianism with regard to interpreting and applying international law. Her last speech also reveals that Cox either lacked access to important intelligence or that she was cherry-picking to support Britain’s illegal military involvement in Syria.

For one, Russian troops are, along with some Iranian troops and some Hezbollah units, the only foreign military units that have a legal mandate to operate in Syria. These troops are present in Syria on invitation of the legal government of the Syrian Arab Republic. British, U.S. American and other foreign troops operating in Syria are doing so without a permission from the Syrian State and without a mandate from the UN Security Council.

Cox was, arguably, and along with the British government, responsible for planning and conducting a war of aggression against a sovereign State and a member of the United Nations.

Following her “Srebrenica template” Jo Cox also omitted the role of the United Kingdom in planning the illegal war against Syria with the help of “rebels”, years in advance. In June 2013 the internationally renown and respected former French Foreign Minister Roland Dumas would go on the record, stating that top-British officials had asked him, two years before the first “protests” in Syria in 2011, whether he wanted to participate in ousting the Syrian government.

The senior Statesman said in an interview with the French TV channel LPC:

“I am going to tell you something. I was in England two years before the violence in Syria on other business. I met with top British officials, who confessed to me, that they were preparing something in Syria. … This was in Britain not in America. Britain was organizing an invasion of rebels into Syria. They even asked me, although I was no longer Minister of Foreign Affairs, if I would like to participate. Naturally, I refused, I said I am French, that does not interest me….This operation goes way back. It was prepared, preconceived and planned… in the region it is important to know that this Syrian regime has a very anti-Israeli stance… Consequently, everything that moves in the region…- and I have this from a former Israeli Prime Minister who told me ´we will try to get on with our neighbors but those who don´t agree with us will be destroyed. It is a type of politics, a view of history, why not after all. But one should  know about it”.

The death of Jo Cox is tragic, and the murder warrants a full and fully transparent investigation. Jo Cox will be rightfully remembered as a British MP who had the courage to address Israel’s violations of human rights and international law. This fact should not cover over her direct or indirect support for violations of international law in Syria. It should also be noted that the possible sanctions against Russia would have had little to no basis in international law.

Remembering Jo Cox as an advocate for international law per se would, as her own conduct documented, be a fallacy. A fallacy that would further entrench the utilitarian and opportunistic use of law when it seems politically expedient, while neglecting international law when it is politically opportune to support an illegal war of aggression. The Syrian refugees whom Cox was “advocating” for would not have been displaced to begin with, had Britain not played a key role in planning an illegal war of aggression or if Britain had fulfilled its obligation as a permanent Security Council member and prevented it or helped stopping it in 2011 rather than adding accelerants to a fire.

Dr. Christof Lehmann is the founder and editor of nsnbc. He is a psychologist and former independent political consultant on conflict, conflict resolution and a wide range of other political issues. In March 2013 he established nsnbc as a daily, independent, international on-line newspaper. He can be contacted at nsnbc international at nsnbc.wordpress@gmail.com

This is an opinion piece and doe not necessarily represent the opinions of the IMEMC.