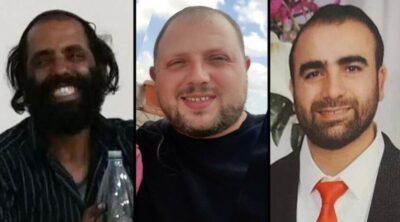 Israeli sources reported that on Thursday night, three men were killed in Elad, and four others injured, in an attack apparently carried out by two Palestinians, who were seen on security cameras in the vicinity carrying a firearm and an axe.

The three men who were killed were identified as Yonatan Havakuk, 44, Boaz Gol, 49, and Oren Ben Yiftah, 35.

Israeli police identified the two suspects in the attack as As’ad Refa’ey, 19, and Sobhi Emad Abu Shaker, 20, from Rommana, near Jenin in the northern part of the occupied West Bank. They launched a massive manhunt for the two alleged attackers throughout Israel and the West Bank.

Israeli police said in a statement, “We have special police forces in the field, Shin Bet [Intelligence Service] forces, helicopters, and other combat units. According to estimates, the two are still in the area, and we are doing everything to apprehend them.”

The Israeli military announced the extension of the closure of the Palestinian Territories (West Bank and Gaza Strip) until Sunday.

The Israeli military, which rules all aspects of life for the Palestinian population of the West Bank and Gaza Strip, had imposed a closure on Tuesday in celebration of Israel’s ‘Independence Day’ on Thursday. On that day, Israelis celebrate the creation of Israel in 1948 on what was, at the time, the state of Palestine.

Israel’s creation on the land led to the displacement of hundreds of thousands of Palestinian residents, turning them into refugees. The town of Elad, where Thursday’s attack took place, was built atop the Palestinian town of Al Muzayri’a, which was “depopulated” by Zionist militias during the Nakba (Catastrophe – which is how Palestinians describe the displacement they experienced when Israel was created) in 1948.

Hundreds of Israeli military checkpoints installed throughout the West Bank prevent the Palestinians from traveling to work, school, or to visit relatives. The closure came in the midst of a five-day holiday celebrated by Muslims at the end of the Holy Month of Ramadan, known as Eid al-Fitr. This is usually a time of celebration and visiting relatives — but such visits and celebrations were prevented by the Israeli military’s restrictions on Palestinian travel throughout the week.

Palestinian President Mahmoud Abbas denounced the attack and said that the killing of Palestinian and Israeli civilians would only lead to further deterioration and obstruct the efforts to avoid escalation and achieve peace and stability.

Abbas also denounced the serious Israeli escalation against the Palestinians, including the constant Israeli invasions into the Al-Aqsa Mosque and the attacks against Muslim and Christian worshipers in occupied Jerusalem that have been frequent and violent during Muslim and Christian holiday celebrations over the past month.

Abbas added that “real and comprehensive peace that achieves stability and the legitimate Palestinian rights of liberation and independence is the safest and shortest war to achieve stability and security for both the Palestinians and the Israelis, and the entire region.”

US Secretary of State Anthony Blinken issued a statement just hours after the attack – before the perpetrators were identified and the details confirmed — condemning the incident as a horrific terrorist attack targeting innocent civilians. Blinken has not condemned any of the killings of 47 Palestinians, 8 of whom were children, that have taken place since the beginning of 2022.

At least 1623 Palestinians, including many women and children, have been injured by Israeli soldiers and colonizers in several parts of the West Bank, including Jerusalem, and the Gaza Strip since the beginning of 2022.