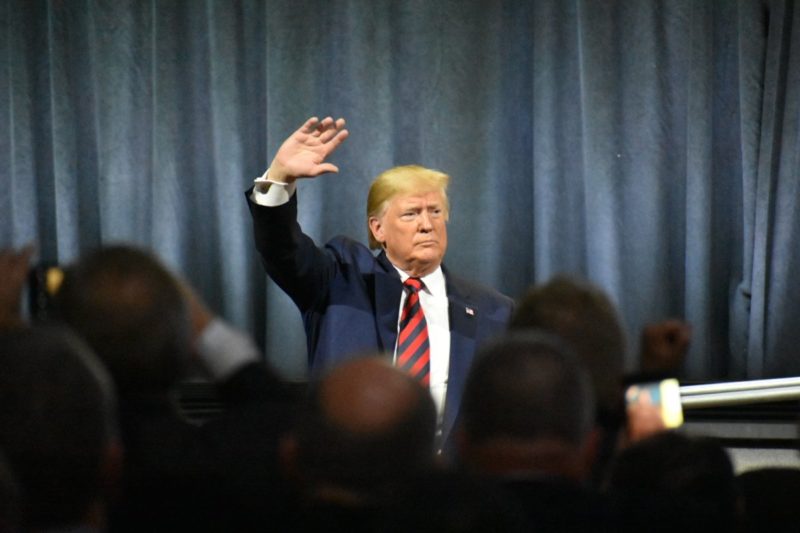 You have to hand it to Donald Trump, he knows which side his bread is buttered.

Spewing out disgusting remarks that some of the commentariat deemed only “controversial” at worst, Trump attended the Israeli-American Council’s (AIC) national summit earlier this month.

Trump used his speech at the summit to back Israeli crimes and racism to the hilt, as per usual, for all American presidents from either party.

But, those were not his “controversial” comments.

Those comments, in fact, were open and disgusting anti-Semitism. But, the crowd of Israel lobbyists did not respond to Trump’s anti-Jewish racism with condemnation – instead they clapped and applauded.

Trump managed to combine some of the worst anti-Semitic stereotypes into a handful of sentences: that Jews love money and are all wealth hoarding, greedy landlords. He also managed to throw in a racial slur against Native Americans for good measure, in the course of deploying his usual attack on Elizabeth Warren and her wealth tax proposal.

But Trump’s open anti-Semitism was excused, justified and minimised by Israel’s supporters in the US.

The condoning of anti-Semitism by Israel’s propagandists, is a reminder that Zionism has a long history of collusion with anti-Semitism – one which goes right back to Zionism’s founder, Theodor Herzl.

This truth was raised when the infamous Balfour Declaration of support for the aims of the Zionist movement was being debated by the British cabinet at the time – by the only Jewish cabinet member, Edwin Montagu.

Montagu wrote in 1917 to his colleagues that: “Zionism has always seemed to me to be a mischievous political creed.”

He wrote: “I assert that there is not a Jewish nation. The members of my family, for instance, who have been in this country for generations, have no sort or kind of community of view or of desire with any Jewish family in any other country, beyond the fact that they profess to a greater or less degree the same religion.”

He had a warning for the rest of the British government: “When the Jews are told that Palestine is their national home, every country will immediately desire to get rid of its Jewish citizens … you will find a (Jewish) population in Palestine driving out its present inhabitants.”

It is a tragedy that Montagu’s warnings were not heeded, and that the Balfour Declaration did indeed begin the process of submitting Palestine to the Zionist settlers, driving out the indigenous Palestinian inhabitants by force.

Trump’s recent actions to help the Israel lobby and attack the movement for justice in Palestine, as well as being wrong in themselves, are also anti-Semitic by implication.

His recent executive order attacking the Palestine solidarity movement on US campuses, was a case in point.

It was trailed in the media as, in effect, redefining Jewishness or Judaism as a nationality – a worryingly anti-Semitic move with frightening historical parallels. The actual text of the order is not quite that.

But there is no doubt that, in embracing and entrenching Israel’s favoured, bogus, “working definition” of anti-Semitism, the order makes it harder for any genuine anti-racist efforts against anti-Semitism.

She continued that “rather than providing any new protections to Jewish students against the rampant and deadly anti-Semitism of a resurgent white nationalism,” the order “aims to define the contours of what we can say about Palestine and Israel.”

“We won’t abide, and it will be challenged,” Khalidi declared.

It is yet another reminder that anti-Palestinianism and anti-Semitism are closely related. A markedly large number of supporters of Zionism want Jews to leave Europe, so that they will no longer have to live in close proximity to them.

This is part of the reason why Joseph Massad, associate professor of Modern Arab Politics and Intellectual History at Columbia University, has called the Palestinian people and anti-Zionist Jews “the last of the Semites, the heirs of the pre-WWII Jewish and Palestinian struggles against anti-Semitism and its Zionist colonial manifestation.”

Asa Winstanley is an investigative journalist living in London who writes about Palestine and the Middle East. He writes for The Electronic Intifada where he is an associate editor and also a weekly column for the Middle East Monitor. ~ Days of Palestine