UAE Company To Import Products Made In Israel’s Illegal Colonies 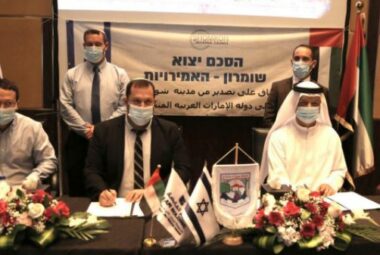 According to Israeli sources, the head of the “Regional Council of Settlements, in the northern part of the occupied West Bank, arrived in Dubai two days ago, accompanied by heads of companies in the illegal colonies, and signed agreements with a company in the Emirates to import goods made in these colonies.

The sources stated that the Dagan’s visit came only a month after he, and other colonists, visited the EUA and held meetings with companies in the country.

According to the agreement, the Emirati company would be importing various products, including alcohol, honey, olive oil and Tahini, from these illegal colonies.

All of Israel’s colonies in the occupied West Bank, including those in and around occupied East Jerusalem, are illegal under International Law, the Fourth Geneva Convention, in addition to various United Nations and Security Council resolutions.

Article 49, sixth paragraph, of the 1949 Geneva Convention IV provides: “The Occupying Power shall not deport or transfer parts of its own civilian population into the territory it occupies.”

Article 85(4)(a) of the 1977 Additional Protocol I provides that “the transfer by the Occupying Power of parts of its own civilian population into the territory it occupies” is a grave breach of the Protocol.

Under Article 8(2)(b)(viii) of the 1998 ICC Statute, “the transfer, directly or indirectly, by the Occupying Power of parts of its own civilian population into the territory it occupies” constitutes a war crime in international armed conflicts.