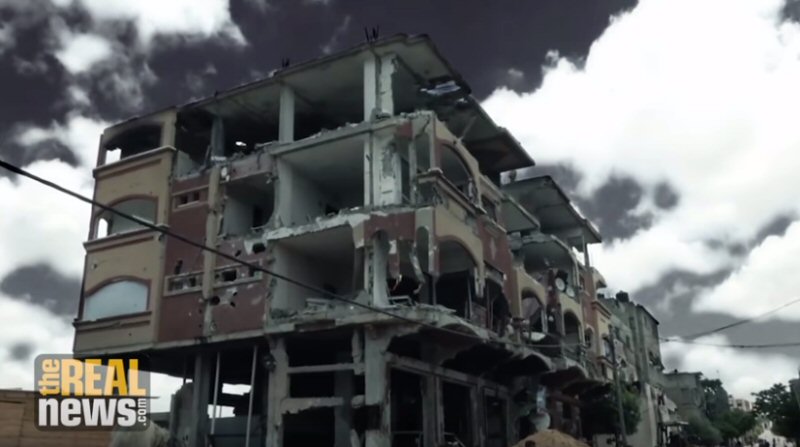 A scathing report from United Nations Conference on Trade and Development describes how 50 years of Israeli occupation has prevented economic development in Palestine, and highlights the destructive impact of Israel’s illegal settlements in the West Bank.

Dr. Alaa Tartir is the Program Director of Al-Shabaka: The Palestinian Policy Network and a Research Associate at the Center on Conflict, Development, and Peacebuilding (CCDP) at the Graduate Institute of International and Development Studies (IHEID), Geneva, Switzerland. Amongst other positions, Tartir previously served as Visiting Scholar at Utrecht University’s Department of History and Art History, The Netherlands, Post-Doctoral Fellow at The Geneva Centre for Security Policy (GCSP), and Researcher in International Development Studies at the London School of Economics and Political Science (LSE), where he earned his PhD. Follow Alaa Tartir on Twitter @alaatartir and read his publication at www.alaatartir.com.

SHARMINI PERIES: It’s The Real News Network. I’m Sharmini Peries coming to you from Baltimore. The United Nations Conference on Trade and Development, UNCTAD, published a new report this week on the economic effects of 50 years of Israel occupation of the Palestinian West Bank and the Gaza Strip. The report explains how Israeli occupation prevented economic development in the occupied Palestinian territory, and specifically how illegal Israeli colonies in the West Bank affected the Palestinian economy. Alaa Tartir is the program director of Al-Shabaka, the Palestinian Policy Network. He joins us today from Ramallah. Thanks for joining us, Alaa.

SHARMINI PERIES: Alaa, UNCTAD has a history of producing well-documented, reliable information and economic data on the Palestinian economy. This report is no different. Whats your take on it?

ALAA TARTIR: Indeed, the UNCTAD has produced so many reports over the last years, and this is a particularly important and interesting report because it’s coming at the 50th Anniversary of the 1967 Israeli occupation of the West Bank and Gaza Strip. In this report, then, UNCTAD is not shying away from expressing things as they are, a military occupation that caused economic losses that caused destructive impact on the Palestinian economy. Therefore, the UNCTAD reports spell out these consequences and impact very, very clearly, and in a very evidence-based way that shows exact consequences of 50 years of occupation, what it’s meant to the Palestinian economy, to the ability of the Palestinians to run their economy, and to the everyday life conditions, economic conditions, of the Palestinian people.The importance of this new UNCTAD report is that it really tells the truth as-is, the economic conditions as they are after 50 years of Israeli occupation.

SHARMINI PERIES: Now, according to this report, between 600,000 and 750,000 people occupy these illegal Israeli colonies, nearly half of them live in illegally annexed East Jerusalem. Why are the colonies highlighted in the UNCTAD report? What makes them specially damaging to the Palestinian growth?

ALAA TARTIR: They are especially damaging for the Palestinian growth because they are cutting any availability for the Palestinians to develop a viable economy, to have connected pieces of land to produce, to have sovereignty on, to be able to run their economy freely. Because of these illegal colonies and settlements, then the Palestinians are not able to connect. The Palestinians are not able to produce. The Palestinians are not able to farm the lands. With that high level of fragmentation, and with that explicit and vivid illustration of occupation, then the Palestinian economy is not able to be functioning well in favor of the Palestinian people. If you look at the economic conditions, they worsen with time as the settlements and the Israeli illegal colonies expanded. Nowadays the per capita GDP is like as it used to be in the mid-1990s, and after all these international aids which totaled more than $30 billion, we’re still not able to see the Palestinians in better conditions, economically speaking here.The importance of the Israeli illegal colonies is very clear why it is coming to the economic … Why it’s affecting the economic conditions, and as the UNCTAD is part of the international system and the international structures, and there’s an agreement out there that the two-state solution is the viable, and the only solution. Then this UNCTAD report shows clearly that there are so many question marks to be raised, and so many failures that have been realized over the last two decades, and the settlement is in the core of these issues.

SHARMINI PERIES: All right. What’s very interesting about this report is that it sort of aggregates data that has already been out there, that UNCTAD itself has used in the past and collected. However, this report also highlights some new trends. Could you give us what those are?

ALAA TARTIR: The unique thing about this recent UNCTAD report is that it really uses the right language. It talks clearly about the occupation, about the consequences of the occupation that’s been going on for the last 50 years, about the correlative costs, about the destructive impact of this occupation on the Palestinian economy, and why the Palestinian economy is not viable, why the Palestinian people are not in a better condition. It is clearly coming from a clear political assumption that what we’re witnessing today, and all these losses that’s been going on for the last 50 years is becoming precisely because of the continuation of the Israeli occupation. Having said that in a very clear language makes the case very clear that this occupation needs to be over and to finish this occupation in order to have an economy that is viable, that is able to take the Palestinian to the next level, and that they can enjoy the right in development and for development.This is precisely important and unique about this report, especially if we compare it with other reports, coming, for example, from the World Bank and IMF. World Bank and IMF are still stuck in the 20-years-old paradigm, neo-liberal one, that thinks about the occupation as mere restrictions. They think that the private sector will lead the economy. They don’t tackle the political construct of the development problems of the destruction and the Palestinian economy. Here, where politics is brought back in to the equation, is what is really important about this UNCTAD report, and other previous UNCTAD reports as well.

SHARMINI PERIES: All right. Alaa, Professor Sara Roy coined the term de-development, and used it to describe the results of Israeli policies towards the Gaza Strip. The report uses the term more broadly and applied to the West Bank as well. Explain this term, what it means in relevance to Palestine and the Gaza Strip, actually to the Gaza Strip in particular.

ALAA TARTIR: The concept of de-development has been developed by Professor Sara Roy of Harvard, and de-development is a process, first of all. It’s a process that’s been going on for last decades, and basically it means the denial of the basic right to development. Palestinians don’t have the right to enjoy development, and cannot practice that as a right that is granted to all human beings around the world. But also, it means that the basic pillars for meaningful development process are not there. Therefore it means that the transformative capacity of the Palestinian economy is not out there. It goes beyond underdevelopment. It’s a process that goes so deep that the Palestinian economy cannot really be reversed in its condition to become a productive economy, to become a viable economy without tackling the political issues that create this process of de-development.

SHARMINI PERIES: I remember in an interview we did with you back in June, you spoke about the high dependency of Palestinian economy on international aid, and you said that this aid doesn’t really contribute to development and doesn’t serve the interest of the Palestinians themselves. The UNCTAD report lists the falling levels of aid as one of the main reasons for the lack of growth. Whats your take on it now?

SHARMINI PERIES: Alaa, the UNCTAD officials won’t be able to respond to this question because of the levels of power and authority within the United Nations system, however you could. The question is, whenever any agency within the United Nations come up with something really significant, provocative, that really challenges the dominant discourse of the Israeli state, they tend to squash it, put it aside, restate it, eliminate, black out parts of it and so forth. What do you think will happen in terms of this report? Is there a chance that the Israeli government will come down hard on the UN in relation to this report, and will they be successful?

ALAA TARTIR: Most likely they will use it as another example how the UN is not being in favor of Israel, and not being supportive, or not being at least neutral according to the Israeli narrative. I think the Israelis will push back, but also the Israelis are used to the UNCTAD reports over the years, and they … I guess they are predicting it. Most likely they will use it. They will push back, but it’s in a report that’s being sent to the liaison committee, as other reports by the IMF, by the World Bank, and other actives. This is something important to keep in mind, because Israel cared more about what the reality about what the World Bank and the IMF would have to say in this regards. But they will not let it go. They will push back. But the report is out there, and it’s very important to look at that report if we want to understand what were the consequences of the Israeli occupation on the Palestinian economy, and the economic conditions of the Palestinians over the last half century.

SHARMINI PERIES: All right. Alaa, I guess I cannot leave you without asking you also, in terms of the conditions in Palestine, how responsible is the Palestinian Authority to the lack of de-development in the territory?

ALAA TARTIR: Well, the Palestinian Authority is part of the problem, because they contributed directly and indirectly to the process of de-development that we’re going through. By accepting the conditions and paradigm and neo-liberal thinking that the World Bank and IMF and the main donor community imposed on the Palestinian authority, they didn’t push back. By that, they became part of the problem and part of the de-development process. They didn’t’ take care of productive capacities of the Palestinian economy, of agriculture. They didn’t challenge the destructive economic policies by Israel or by the major international institutions, like the World Bank and IMF.By being unable and uninterested in changing these dynamics, then they became part of the problem and an actor to blame. They are not the strongest actor in the equation, but if they are truly representative of Palestinian people and their aspirations, they would become very … They would push back, they would present a clear economic agenda that put the Palestinian rights first, rather than the interest of other actors, including Israel. They failed with that test, and they’ve been failing for quite a long time, because we’re not witnessing any shifts in the economic paradigm that the Palestinian authority is adopting, but rather an entrenchment of the old same things that just keep producing and reproducing the same problems, and therefore not able to go beyond the vicious circle and the economic conditions that keep worsening with the time.

SHARMINI PERIES: Alaa, that was excellent analysis of the situation on the ground. I thank you so much for joining us today.

Also from Al Shabaka: Rethinking Our Definition of Apartheid: Not Just A Political Regime