US Ambassador to Israel Participates in Israeli Underground Settlement Expansion 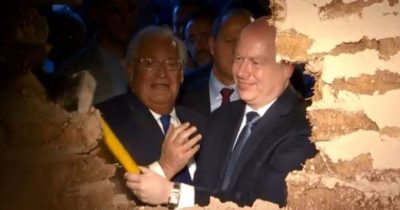 The US Ambassador to Israel, and longtime Israeli settlement financier, David Friedman, participated on Sunday in an underground excavation under the Palestinian town of Silwan, in East Jerusalem, actively participating in the illegal settlement action by bashing with a hammer a section of ancient underground wall located beneath Palestinian homes.

In addition to Ambassador David Friedman, the US “Peace Envoy” Jason Greenblatt also participated in the controversial and illegal excavation, along with Sara Netanyahu, the wife of Israeli Prime Minister Binyamin Netanyahu, who recently narrowly avoided prison time by negotiating a plea agreement in which she pleaded guilty to corruption charge.

The presence of US officials at the incident marks the first time that the US, or any country, has decided to recognize Israeli sovereignty over the Old City of Jerusalem.

The Old City was declared an international space open to all during the declaration recognizing the state of Israel in 1948. But since 1967, Israeli forces have occupied the mainly Palestinian city and have used many measures, legal and illegal, to push out the Palestinian residents of the city.

This archaeological dig is to excavate a tunnel that Israeli state archaeologists claim was used by Jewish pilgrims thousands of years ago.

According to a statement by the Israeli non-profit Emek Shaveh, the group believes that this incident with the U.S. officials is “a further step in American support for the pro-settlement policy in Jerusalem, and particularly the touristic-settlement projects….It is inexcusable to ignore the Palestinian residents of Silwan, carrying out extensive excavations of an underground city and to use such excavations as part of an effort to tell a historical story that is exclusively Jewish in a 4,000 year-old city with a rich and diverse cultural and religious past”.

In an editorial in the leading Israeli newspaper Ha’aretz, the paper’s editors write, “The participation of American diplomats at an event sponsored by a right-wing group in East Jerusalem constitutes de facto recognition of Israeli sovereignty in Jerusalem’s historic basin. If anyone had any doubts about that, Friedman made clear in an interview with the Jerusalem Post that, ‘The City of David is an essential component of the national heritage of the State of Israel.” Giving it up, even in the context of a peace agreement, he said, “would be akin to America returning the Statue of Liberty.’”

The problem with this argument, according to the editors of Ha’aretz, is that, “This recognition doesn’t just put the American administration on the extreme right of the Israeli political map – thus undercutting the claim that American can be an unbiased broker between Israel and the Palestinians – but it also ignores the complicated reality in Silwan, East Jerusalem and the entire region. The tunnel, which was excavated using controversial methods from a scientific standpoint, harnesses archaeology to politics while ignoring the nuances of Jerusalem’s ancient past….Anyone having even a passing familiarity with the Palestinian people knows that there’s no chance of arriving at any kind of agreement that will end the occupation so long as Israel continues to control East Jerusalem and the Temple Mount. Thus, by mere words and an event dripping with sweetness and smiles, the administration of U.S. President Donald Trump has sentenced Israelis to a life of constant conflict, or to an apartheid state in which there are two types of residents, those with rights and those without them.”

Over 300,000 Palestinians live in the city of Jerusalem, at least 20,000 of whom live in Silwan. These Palestinians have no citizenship rights and are not granted freedom of movement by the Israeli authorities. They are frequently displaced from their ancestral homes by Israeli settlers, particularly in Silwan neighborhood, which has been targeted by Israeli right-wing settlers for colonization.

WATCH: U.S. ambassador to Israel David Friedman takes a 10 pounds hammer and breaks open a tunnel which runs under the Palestinian village of Silwan to the old city of Jerusalem. This happens at a settlers organisation event with Sara Netanyahu and Sheldon Adelson at his side pic.twitter.com/oeju5NIH7M