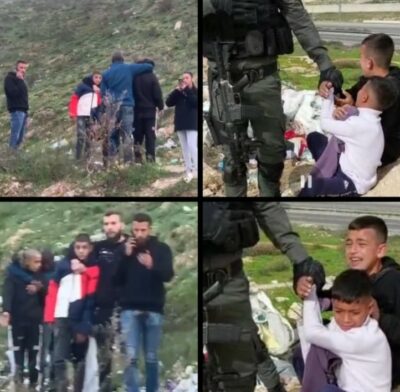 On Sunday evening, Israeli soldiers abducted four Palestinian children in the al-Habayel area at the entrance of the al-Isawiya town in the occupied capital, Jerusalem, in the West Bank. A video from the scene shows the terrified children crying and begging to go home.

Eyewitnesses said the soldiers invaded the area and abducted the four children, in addition to assaulting and cursing at two of them.

The Wadi Hilweh Information Center In Silwan (Silwanic) said the children were crying, screaming, and begging the soldiers to release them.

One of the children cried and asked, “What are they [the soldiers] going to do with us? They will never let us go…?!”.

Firas al-Jibrini, a lawyer with Silwanic, said the soldiers abducted Daoud Hijazi, 11, and moved him to interrogation at a police center in the French Hill.

He added that the soldiers interrogated the child for more than five hours before summoning his mother and eventually allowed her to take him home after imposing a five-day house arrest order.

The soldiers abducted Mohammad Yacoub Sonnokrot, 9, and released him after a few hours of interrogation.

In addition, the soldiers abducted Hamad Mahmoud Khater, 17, and Moath Oweiwi, 13, and interrogated them for several hours before remanding them for further interrogation Monday.