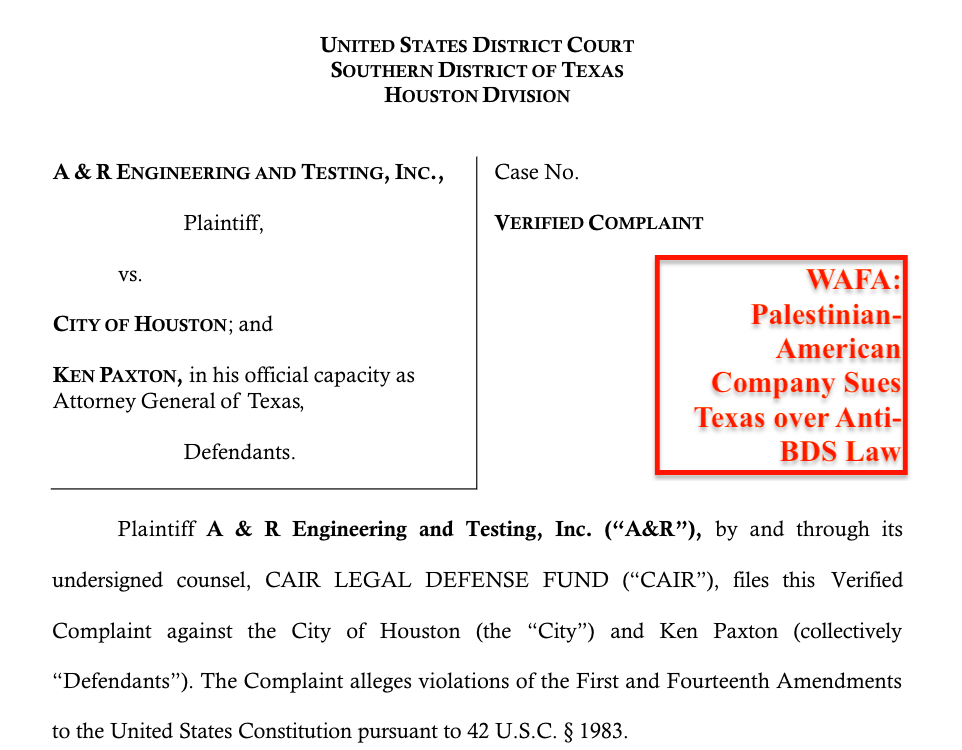 WASHINGTON, Friday, November 05, 2021 – [Palestinian News and Information Agency (WAFA)] – A Texas-based Palestinian-American engineering firm has filed a lawsuit challenging a legislation that bars the state from doing business with companies participating in the Boycott, Divestment and Sanctions (BDS) movement against apartheid Israel.

A&R Engineering and Testing Inc said in a complaint filed before a Houston federal court that the law violates the right to participate in economic boycotts as a form of protest.

“It is my right and duty to boycott Israel and any products of Israel,” said Rasmy Hassouna, the company’s executive vice president, according to the complaint. “This policy is against my constitutional right and against International Law.”

According to the suit, filed by the Council on American-Islamic Relations (CAIR) on behalf of Hassouna, A&R has done more than two million ($2,000,000) worth of business with the city of Houston over the past seventeen years.

Last month, when he received his contract for renewal, Hassouna noticed a new clause contained in it that required him to pledge not to boycott Israel. However, he refused to sign a contract renewal acknowledging compliance with the law, which applies to all municipalities as well as the state.

In addition to filing the complaint, Hassouna, who is of Palestinian origin from Gaza, also asked the court to issue a temporary restraining order barring enforcement of the law while the court case proceeds.

Texas is one of several US states that have enacted laws targeting the BDS movement, a non-violent and Palestinian-led initiative that encourages individuals, nations and organizations to censure Israel’s consistent violations of international law and human rights standards through various boycotts.