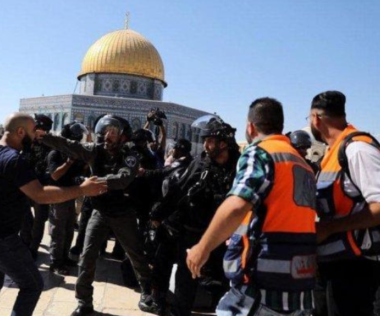 Azzam Khatib, director of the Waqf department, stated that a total of 29,610 extremist Israelis have forced their way into Al-Aqsa Mosque, in 2019, raising concerns of an organized scheme to change the long-held status quo at the holy compound, the Palestinian News and Info Agency (WAFA) reported.

In a statement released on Tuesday, Khatib stated that the record number of extremist Israelis who invaded the Muslim holy compound, located in Jerusalem’s Old City, under heavy protection of Israeli police, special forces and intelligence, was a breach of the historical and legal status at the Mosque.

“All signs and data indicate an escalation in the frequency of violations against the blessed Al-Aqsa Mosque and its surroundings through a series of unprecedented trespasses, which constitute an infringement of the historical and legal status of the blessed Al-Aqsa Mosque, as an Islamic mosque for Muslims alone, under the patronage of King Abdullah II (of Jordan),” said Khatib.

He warned against “attempts by the occupying power to exploit the issue of Al-Aqsa Mosque as a platform to achieve political gains and for electoral propaganda for individuals and groups, who do not understand the dangers of these actions, in their efforts and insistence to agitate the feelings of millions of Muslims around the world.”

Khatib stressed that the Islamic Waqf department insists on confronting all measures and violations against Al-Aqsa Mosque and all its buildings, including Bab al-Rahma, also known as the Golden Gate, which he said is an integral part of Al-Aqsa Mosque and which Israeli police have been trying to keep Muslim worshippers away from it while allowing Jewish concentration at the site during their presence at the Mosque compound.