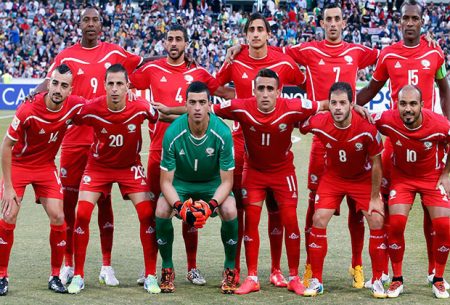 The Palestinian national football team beat Bhutan 2-0 in the Asian Cup qualifier to head the four-country group that also includes Oman and the Maldives.

The Asian Cup final will take place in the UAE in January of 2019. The win raised Palestine’s FIFA ranking to 93, having been ranked 138th in March.

“We want to move beyond a mere regional and continental presence to… the international arena,” Susan Shalabi, vice president of the Palestinian Football Association (PFA) said, according to Days of Palestine.

The PFA’s insistence that players from Gaza participate paid off, as Gazan defender Abdel Latif Bahari’s double-kick goal in the final minutes of the qualifier sealed Palestine’s victory.

With nine points in three games, Palestine needs a single point in the next three games to qualify for the Asian Cup.

The new FIFA Forward program will give member associations $5 million over four years. “If we invest this money well, we expect a leap in our football,” said Shalabi.

“But, we also need to invest in income-generating projects. We’re still takings the first steps in marketing, but hopefully we can get the attention of more sponsors.

Ticketing should bring more revenue when the league becomes more competitive. We now have the Palestine Sport channel, and we hope it gets enough coverage and interest to bring in revenues.”